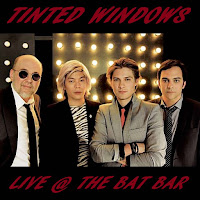 Two members of the short lived and briefly hallowed Tinted Windows had legit power pop bona fides to their credit - Bun E. Carlos from Cheap Trick, and Adam Schlesinger, courtesy of Fountains of Wayne.  Yet the other half of this supergroup equation, James Iha (Smashing Pumpkins) and frontman Taylor Hanson (from you know where) came from backgrounds that weren't terribly off the mark, and they jumped into their respective rolls of guitarist and lead vocalist seamlessly.  Tinted Windows power pop premise was a simple but sturdy and effective one, and the quartet bashed out indelible three-chord salvos aplenty on what was to be their only album in 2009, which was something of a godsend coming on the heels of a decade of bad nu-metal and ostentatiously 'serious' indie rock.

This set was tracked from the band's March 2009 appearance at Austin's SXSW, just one month prior to the release of the Windows record.  The band resisted what must have been at least a moderate urge to backtrack and dole out material from their more renown endeavors, but instead, they stuck strictly to originals, and good on them for that.  All the hits are here - "Can't Get a Read on You," "Cha Cha," and of course "Kind of a Girl."  Boogie til you puke ya'll.

Thank you SO much. I saw them live in San Fran years ago. Fun stuff.

I'd love to find the studio version of "The Dirt", released only in Japan, if anyone has it.