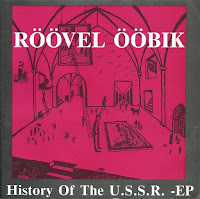 And we have our first Estonian entry.  For reals yo.  Röövel Ööbik wafted their way onto my radar a couple years ago, most likely through a genre search on Ebay, but I can't recall for certain.  Their moniker translates to "Robber Nightingale."  Going by the sleeve art and brief liner notes, it appears Röövel fancied their ethos as punk, yet from the sound of it they seemed to take a shine to American indie rock, angling towards the lo-fi and to a lesser extent, emo variations thereof.  Delivering their lines in an apparent merger of Estonian and English automatically lends some mystique to this quartet, however this chip off the 'ol Soviet bloc has a unique sonic aesthetic to boot, often rich in sweet ringing guitar lines and fuzzy distortion.

To get an idea of where Röövel Ööbik's heads were at in terms of a social conscience at the time of this recording, check out this blurb from the record insert:

Estonia has been for over 50 years a part of the Sovjet Union, thanks to Hitler-Stalin pact.  It is only now that they have started to claim their lost independence back.  And one good weapon is always music.

Was this little 'ol record part of that collective "weapon" that helped bring down the Berlin Wall in 1989?  Probably not, but it's pretty inviting nonetheless, particularly the second cut in, "The Dead Ones."  Things unravel on History's caterwaul of a closer “Handguide to Happiness,” but I wouldn't let that dissuade you from passing this ep up.  Believe it or not, there's more to be had from Röövel on Amazon downloads.

My apologies for the fairly discernible skip in the midst of the title track.  I was unable to adequately remedy it.

wanna PEACE
of Me?

Very PUNny Kold! Gonna have to steal that one for myself, Cheers.