The Wonderul World of the Pursuit of Happiness (1996, Iron Music) 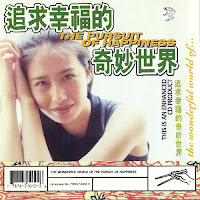 Back in the twentieth century it was all too easy and convenient to ignore import releases.  Even fans that flocked to TPOH's 1988 magnum opus Love Junk had either long moved on, or were entirely unaware of ...Wonderful World when it landed in the band's Canadian home turf circa '96/'97.  Indeed, by the time this fifth LP quickly came and went, Moe Berg & Co's. prominence had waned, but living so close to the border of Ontario didn't give me as much of an excuse perhaps.  At any rate, TPOH fans who passed on this one did so to their own detriment, as Wonderful World follows a close third to Love Junk and One Sided Story (1990) in terms of out-and-out quality and gratification.  Their third salvo, Downward Road was no slouch, nor was the less spoken of independently released follow-up Where's The Bone in '95, but in virtually all respects TWW of TPOH is the clear cut winner in the band's post-Rundgren era, as it were.

Though I can't confirm it's a concept piece, TWW sure operates like one, both thematically and in continuity.  There are multiple references to a love interest dubbed Tara, and the songs generally pertain to lovesick reveries, countered with some occasional flashing yellow lights on Moe's otherwise utopian love train.  The album's brief manic moments of tension arise in two rock 'em, sock 'em surges.  "She's the Devil" is a riff-roaring punk-cum-Aerosmith romp that rocks harder and more fervently than anything TPOH ever committed to tape.  That snarling as-all-get-out blast is paralleled in "Hate Engine" where again, Berg channels his inner Tyler/Perry more effectively than the graying, real McCoy were capable of at the time.  But surrounding these thunderous slammers were a bevy of thoughtful ballads illustrating the intoxicating spell of romance that the man of hour (Moe Berg) was evidently under.  It's within this strata that Pursuit really shine, especially on harmony-enhanced numbers "What You Did to My Girl," and "I'm Just Happy to Be Here," proving those years under the wing of Todd Rundgren paid off.  I'd be remiss if I neglected to mention a few of the exemplary songs that fall between the two extremes namely "I Like You" and "Carmalina."

Just one note of caution you'll no doubt notice the song-to-song transitions were hastily edited, so jarringly notable at times they frustratingly divert your attention from the music at hand.  These segues aren't as distracting when listening to the CD uninterrupted, but of course you'll likely be partaking of this on your phone or iPod.  Fair warning, but the material itself is by and large excellent.  I've also updated the links to the previously posted TPOH demos and the I'm an Adult Now ep, as well as Moe's early '80s endeavors facecrime and Modern Minds.

I unabashedly love love LOVE this band. I was introduced to them by an ex-friend back in mid-1990. Moe Berg's perfect power pop hooks grabbed me instantly. I followed them all the way to this album, their pretty official end. "The Wonderful World..." frustrated me, precisely because of the jarring song-to-song transitions you mentioned. I can understand when an album deserves the "all-one-track" treatment (see Prince's "Lovesexy"), but being comprised of short pop songs, I wish this had been split up in the traditional manner. Still, it's got some very enjoyable tunes.

"She's So Young", "Down On Him", "All I Want", "New Language", "Pressing Lips", "Cigarette Dangles", "Save The Whales", "Glamourous Death", "Young And In Love", the tunes you singled out in your review... Berg has a "murderer's row" of amazing songs to his credit. Damn, now I have to put on my TPOH playlist or it's going to eat me alive!

The only comment I can make it: Moe Berg is a genius.

I found the band with "Love Junk" (huge Rundgren fan) but stayed with them, although the two Todd-helmed albums are still my favorites. Even like the Berg solo effort. Sad it has been so long without any new output.

And don't forget how "The Truth" is as perfect a final song as any band could hope for — despite Moe going on to that solo album.

Finally got around to listening to this and was really struck by how good it is. Thanks for this!

Of course you also can't ignore the echoes of Def Leppard's Hysteria hanging around stage left on "She Kiss Away" on this one either since you already picked up on the Sweet Emotions of "She's The Devil"... :*)~