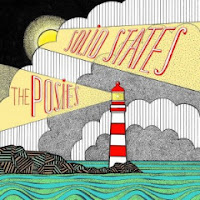 Ok, suppose your favorite band zigs when you expected them to zag.  And suppose that grouped penned a significant chapter for the genre they had left a sizable footprint on.  True, Solid States is technically a post-reunion album (their third, following up on 2005's Every Kind of Light and '10s Blood Candy), and as such, expectations aren't quite as lofty for a new Posies record to begin with.  Then again, this is after all the work of Jon Auer and Ken Stringfellow, and given their collective resumes and reputations, there's bound to be sizable scrutiny.  To cut to the chase, Solid States is palpably distinct from any other Posies release in that it (gulp) tamps down on the guitars, of all things - dramatically in some cases.

If you've encountered any hype surrounding this record, it no doubt concerns the reconvened band's embrace of electronic textures and other implements and innovations once foreign to their palette.  States has it's share of synthesized tangents and diversions to be sure, specifically on the syncopated "M Doll," and "The Definition," not to mention the commanding opener "We R Power."  It hardly sounds like a typical day at the Posies office, but if that strikes you as too much of a quantum leap consider how advanced Frosting on the Beater was held up to the witty acousti-folk of their debut, Failure.  And speaking of wit, the Posies old school charm isn't exactly in abundance here, an aspect that to one extent or another has plagued the so called "reunion" records.  In fairness, Solid States does occasionally concede to the Posies aesthetic of yore, indulging in telltale Auer/Stringfellow harmonies on "March Climes" and the quite excellent "Scattered," while the shuffling "Titanic" strikes a middle ground.  And it may be something of a guilty pleasure, but I'm getting a charge out of "Rollercoaster Zen's" cosmopolitan stride.

In the net-net of things, it's hard to sum up this disk with any overarching generalities.  Is it a transitional record of merely a detour?  It's not their Kid A, New Adventures in Hi-Fi, Smiley Smile or even their Turbo (God forbid).  Not quite amazing, but light years from a disgrace, Solid States is where the Posies stand today, idiosyncratic as that stance may be.  For the life of me, I still can't tell Ken's and Jon's voices apart, so maybe not as much has changed as I thought.  Solid States is available from all the usual suspects, including Amazon, iTunes, and hopefully a shop near you.
Posted by spavid at 6:57 AM

Yep, I was finally able to squeeze a Turbo reference in somewhere on these hallowed pages. Only took eight years.

Right on the money with your view of SOLID STATES.

I love Solid States (and still love Turbo too !).
"Unlikely places" is glued to your mind forever after the first listen anyway...