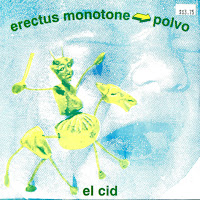 Thought this would be a suitable follow-up to my Raymond Brake post from the other night.  I first became conscious of the fact that I was a record collector somewhere in the mid-90s, and this split single was one of the first "rare" records I couldn't track down.  Thing was, it never was particularly rare, just a bit hard to find.  Eventually I just forgot about it until I ran into a copy of it at a recent record show.  So here you have it, two of the most left-of-center bands to ever bear the Merge Records trademark.  I've yammered on about Polvo before, a band whose crooked, Sebadoh meets Sonic Youth pastiche was mildly addictive back in the day, especially on their earlier releases.  "In The Hand, In The Sieve" appears here in a lengthier iteration than the version that landed on their debut, Cor Crane Secret.  Erectus Monotone had more of a scuzzy art punk thing going for them, boasting a co-ed lineup to boot.  Never investigated them too extensively.  "Fragment (Pam)" appears to be exclusive to this record.  Both bands crossbreed on the the altogether avant and warped b-side "Anything's Fine."  Consider yourselves warned.

A1. Erectus Monotone - Fragment (Pam)
A2. Polvo - In the Hand, in the Sieve
B. Erectus Polvotone - Anything's Fine

Reup please this one. Many thanks !