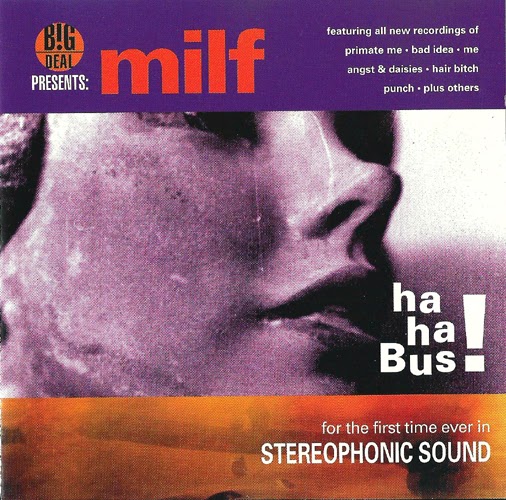 Five years on, I wouldn't rephrase a smidgen of that summation, but if these guys are fresh to your eyes/ears milf's proper debut is a good place to start your journey.  ha ha bus! isn't wall to wall fireworks, though it's most stunning offerings (check out this trifecta of perfect tens: "hate me," "model t," and "and there's me") are as visceral and gloriously amped-out as music of this ilk gets.  Dense, gauzy guitars soaked in a dream-pop haze, a noisome delivery system, and Justin Chapmans loud/soft vocal aplomb were milf's killer cocktail, one that was employed to it's fullest extent on ha ha bus!, which unfortunately wasn't quite duplicated on their follow-up, antidope.  Will get to that one soon, and hopefully fix the broken links in my previous ovations to the group.  Enjoy.

I didn't know it at the time, but looking back, one of my rules is "if it's on Big Deal, then get it." With your reco how could I resist?

you're the best. thank you so much for indulging the request! sorry i missed it the first time around. haha.

Any chance of Reupping their other stuff?

At some point soon BeSound, Glad you're digging this folks.

Hello FYI, the last 18 copies of the milf/Tugboat annie split 7" on green vinyl can be found here:https://cashcow.bandcamp.com/album/tugboat-annie-milf-split-7

Due for a re-up! Also where do I learn more about them in this day and age?

Darn you zippyshare for dashing my hopes! Please re-upload this one if you have the opportunity. Thank you very much.

How fun to find that you found this music in 2009! I went to college with these guys in the 90s and went to every show! Still love the music to this day. 😊