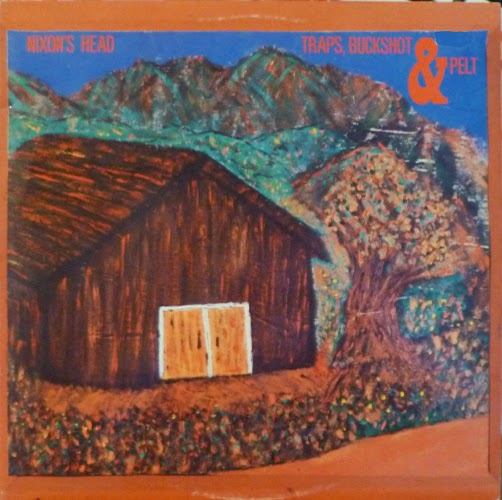 Before doing my homework, I was prepared to reference Nixon's Head exclusively in the past tense, but not only do they have an online presence, they're still roaming the earth apparently, or at least their corner of Philadelphia.  Just when I thought that all the City of Brotherly Love had to offer was cheese steak sandwiches and the Dead Milkmen, the wise bard at the often noted Little Hits blog tipped me off to this marvelous indie rock contingent, who sadly released but a handful of records during their initial '80s lifespan, this one being the lengthiest of the bunch.  For Traps, Buckshot & Pelt, Nixon's Head were a five-piece setup, and a fairly no frills one at that.  No gaudy Reagan-era schlock here pal, just straightforward guitar rock with faint resemblances to Twin-Tone epoch Soul Asylum (albeit quieter), Mercyland and Agitpop.  "I Like You" and "She Should Know Better" get my juices flowing the most, though I'd be misleading you if I passed this disk off as being anything less than totally consistent.  This rip was taken straight from my own crackly copy, but it appears the band has made this and a previous ep available on Soundcloud.  If that weren't enough, original vinyl copies might still be obtainable from the Groove Disques store, where you can also investigate their "reunion" releases at very modest prices.

Thanks for this one. I live in Philly and didn't know they were still around.
BTW, more than cheese steak sandwiches and the Dead Milkmen... The A's, Tommy Conwell, The Hooters, Bunnydrums, Pretty Poison, Rival Suns, G. Love & Special Sauce, Hall & Oats, Ben Arnold, Bricklin, The Trammps, Todd Rundgren, The Soul Survivors, Cinderella, I could go on. I'm not saying I personally like some of this music, but if you get a chance, check out David Uosikkinen’s In The Pocket:Essential Songs Of Philadelphia (songsinthepocket.org).

I was going to mention the A's, but I didn't think that would ring a bell with many. How could I forget the Hooters? Never knew that Rundgren and Hall Oates came from Philly. BTW, there's a newish band from your town called Marietta who are worth investigating, esp if '90s emo is your thing. Anyway, sorry for being so lazy and narrow minded.

Hey, thanks for digging us out of the dusty corners of Philadelphia rock history! Yes, we carry on. The fans may stop caring, but the band members don't.