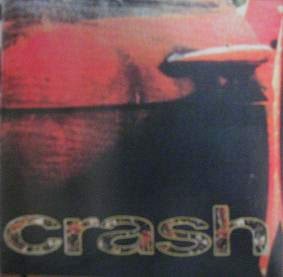 I haven't really brought them up on here, but I'm a big Ultra Vivid Scene acolyte, or more specifically prime-mover Kurt Ralske.  When a friend introduced me to Crash in the early '90s, he made a point of informing me that it was Kurt's pre-UVS band.  Upon hearing Everything Under the Sun (a consolidation of Crash's EPs and I Feel Fine LP) I failed to draw any obvious parallels to Kurt Ralske, most notably because he wasn't singing.  Instead, Crash featured a Morrissey-esque but otherwise undistinctive mouthpiece in the guise of Mark Dumais, who was passable as a vocalist, but a tad short on charisma.  As an entity, Crash dined on the work of a considerable number of their UK indie contemporaries, but had a propensity to spit out much of the charm in the process.  At the very least Ralske's guitar-work compensates, and occasionally Crash really get the ball rolling, namely on the chiming "Almost," and the rousing, Velvets-indebted "In My Head."  As a final saving grace, Everything Under... improves considerably as it's latter half progresses.

A friend of mine runs the Downtown Music Gallery in NYC and he has known Ralske since long before UVS. They had a band in NJ which sometimes does reunion shows. He has played the store with Sax player, Daniel Carter as well. So it seems Ralske is doing more improvised music these days. I was a big UVS fan and was happy to hear he was still making music.

From what I have heard, I get the sense the industry was not to his liking.

Big UVS fan as well so thanks for posting this. Aside from that band I know nothing about him and I found this interview very informative.
http://thequietus.com/articles/13367-ultra-vivid-scene-kurt-ralske-interview

Mark was briefly in the band Something Pretty Beautiful which put out excellent 2 EPs on Creation in the late 80s. Also in that band was Julian Cope's brother Joss

i've got the original crash i feel fine lp on vinyl. my ex actually has a vinyl 45, at least i let her keep it after we split. i am old. so is she...btw mark dumais was very homosexual and subsequently died from complications of HIV...yes, he was a victim of AIDS.

kurt deserves his props, but this was not HIS band. it belonged to mark.