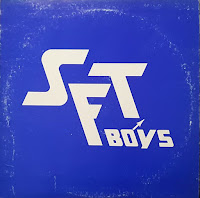 Blatantly superficial as this judgement may strike you (maybe because it is) this quintet from Pennsauken, NJ had a couple of strikes going against them right off the bat.  Based on what, pray tell?  None other than the SFT Boys' token lineup pic on the rear sleeve of this EP, plainly exhibiting the cardinal sin of no less than two band members adorning headbands...and another chap with a mustache and potential mullet.  I know, I know, it was the '80s, but such a sight never diminishes my instinct to shudder, however briefly.  The music fares better, especially on side one, featuring two radio-ready slices of power pop, "What You're Up Against" and "As a Matter of Fact," both zesty bangers with impressive harmonies and a well chosen emphasis on guitars over synths.  The flipside throws us a rather patent but tolerable ballad, "Tomorrow Boy," and the concluding "Underground" doesn't give me much excuse to grippe, save for some faint, randomly inserted robotic vocals. It appears this DIY ep may be all the Boys submitted for public consumption.

Interesting - I grew up in NJ and like reading about obscure groups from the state. Appears they were popular in the summer beach scene in Wildwood NJ and made a local TV show in 82 https://www.youtube.com/watch?v=A9mrejK-B_A

Thanks!! I admit i did much the same 'value judgement' over the years, and probably did miss some cool stuff....on the OTHER hand, if I saw a band with a Rickenbacker guitar, many times I favored them, as most guitarists were not fans of Ricks, and I figured that was a good sign....but many times that led to nothing that great sometimes!!!!!

I hear you Jim, and in the '80s band photos were considerably accurate in deeming what the music might sound like.

Saw that link Tom. Thanks!

Thank you for such a awesome AOR Album!! Keep Rockin'