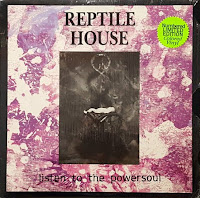 Reptile House slithered out of Baltimore, MD, circa the mid-80s and boasted enough visibility and talent for Dischord Records to take notice, who consequently released the band's debut ep, I Stumble As the Crow Flies in 1985.  A fine record, sporting a quartet of four inspired and emotive post-hardcore salvos with well placed melodic undercurrents.  They waited three years for the follow-up, and given the tendencies of any young and fledgling artist, Reptile House had evolved significantly from those promising rumblings.  I'm just not sure if they traversed in a more preferable direction.  The songs on ...Powersoul are considerably lengthier - not necessarily a negative development in itself, but frontman Daniel Lindenstruth brings a shoutier vocal parlance to table this time (loosely in the vein of Die Kreuzen) that doesn't always flatter what his band seems to be attempting, especially on the eight-minute concluding piece, "Sky Head."  Reptile's aesthetic is varied here, but despite the occasional lack of focus they manage to land some memorable moments like "ParaPolyAnna," the title track, and the ornately poetic and verbose "Mother Michigan" all of which benefit from some measure of tuneful persuasion.  Members of R/H later found themselves in the lineups of more prominent combos ranging form Glenn Danzig's Samhain, Distorted Pony and Lungfish.

First for me, thanks

Yes! Daniel and Asa from Lungfish... with the first Lungfish stuff you can definitely hear the through-line. PLus London May who would go onto Samhain. I love this one, but I'm a lungfish lifer.

Let me begin by saying I'm (only) 32... is there a community on Reddit or something similar where folks can connect? There is so much to learn and discover, or rediscover.