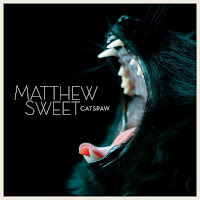 There are untold artists who initially accumulate a respectable following based on a few minor/moderate hits only to see diminishing returns with successive albums, yet still manage to maintain a modest core audience of dedicated adherents. A lot of them put the emphasis on touring, and put writing and recording on the back burner, while some have never strayed from the prolific work ethic that established them with a fanbase to begin with.  A few troubadours that come to mind in this category would be Pete Yorn, Juliana Hatfield, and Matthew Sweet.  As for the initial swath of fans that flocked to Sweet during his power-pop heyday that made 1991's Girlfriend his signature success (not to mention subsequent triumphs Altered Beast and 100% Fun) a good swath of them gradually fell off the bandwagon.  Of course, this is a loss to Sweet and the aforementioned, especially in terms of sheer revenue - but those former listeners are missing out on a wealth of new music in the process.  From a spreadsheet standpoint, his latest, Catspaw is likely to rack up only a fraction of the sales Girlfriend, or even say Blue Sky on Mars garnered.  Luckily, for those who haven't tuned-out, music is an un-quantifiable commodity, and the man in question seems to be angling for some fresh chords, not to mention a tact that wasn't present on his more renown works of yore.

Catspaw squeezes a dozen cuts into about forty minutes - immensely par for the course in terms of Matthew Sweet records. But straight from the get-go, on the initiating "Blown Away" something feels different about this one. Not only does Sweet sing, but his guitar does just as much so, peeling off searing fills that would sound perfectly at home on a vintage Neil Young and Crazy Horse album.  In fact the demeanor of "Blown Away" sounds considerably more sobering and beleaguered than we're accustom to hearing from him, and while the tunes that immediately follow it ("Give a Little" and "Come Home") are comparatively lighter in posture, the sonic context of Catspaw arches, aches and quite frankly cranks like Young, not to mention other heritage-worthy purveyors of classic rock.  Nonetheless this is unmistakably a Sweet record with no shortage of chorus hooks and plaintive ruminations on romance and self-actualization. If you're looking for respites more in keeping with say, his last few records like Tomorrow Forever and the Record Store Day-exclusive LP, Wicked System of Things, you're likely to latch onto "Coming Soon" and "Stars Explode." Not 100% Fun, nor 100% flawless, Catspaw is bejeweled with wailing guitar textures and creative impulses that nicely contrast with what we typically hear from this semi-charmed, power pop maven.  By the way, as a first, Sweet is responsible for handling all instruments here, save for drums which are commandeered by his longtime accomplice and Velvet Crush veteran Ric Menck. Catspaw is available direct from Omnivore, Amazon, and I would hope a physical vendor in your own corner of the world.

Thanks for pointing out the new MATTHEW SWEET cd.
I have 9 cds of him and i love them.
By the way TWILLIGHTZONE blog is really interesting. Have now lookes at it more closely.
JOSEF

Yeah, I got a really big Neil Young vibe from this one. Lots more guitar work than usual. I liked it!

Thank you so much for profiling Matthew Sweet and his new album. I've been a diehard fan for... yikes, 30 years now. Any new music from Matthew makes my day.

Good review on this album and yes I also thought echos of Neil Young but then I had just been listening to Neil. Cheers

Great album. In addition to the amazing guitar work, the trademark Sweet harmonies are exceptional as well. I would compare it to Neil Yong and Crazy horse, but with vintage CSNY vocals throughout.