The Cars - Candy-O: The Monitor Mix 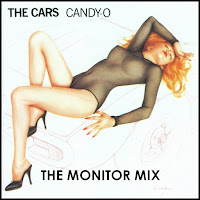 Sorry once again for waiting until the weekend to hook you up with something new.  This whole past week felt a little abnormal, and it didn't help that it began with the rather jarring and unexpected news that Ric Ocasek, frontman for The Cars, record producer, and solo act in his own right died of heart failure Sunday, September 15th at the age of 75.  I don't think I've brought him up before on this site, and save for the band itself only when using The Cars comparatively speaking.  That being said 1983's Heartbeat City and it's associated singles were a big component of the entry drug that got me hooked on rock music, thus placing me on the most significant trajectory of my life.  At one point or another I owned all of the band's albums, and had recently invested in a series of expanded reissues.  Still, they were never a top-tier favorite of mine despite the fact I rarely objected to much of anything they did.  I saw them on their 2011 reunion tour that summer in Toronto, and was mightily impressed.  I knew it was probably a once in a lifetime opportunity.  In recent years I wasn't waiting around for another reunion album.  Or tour.  Or anything.  Besides getting the occasional Cars or (less occasionally) Ocasek solo track stuck in my head, I never kept tabs on him or any of the other surviving members (co-frontman and bassist Benjamin Orr passed away from natural causes in 2000).  Still, the news on Sunday made a dent with me.  In addition to the Cars catalog, I got to know him through interviews and his production work with unrelated artists like Weezer, Motion City Soundtrack, and Guided by Voices.  A life fantastically well lived, even if he had been a bit dormant for the last few years of it. I'd say a well earned retirement.

The general consensus is that the Cars self-titled debut was their high-watermark, and it's not hard to understand why given its sheer consistency and it's reputation as a crossover new wave/AOR record that appealed to the mainstream and those with an edgier appetite.  Candy-O followed a year later, and despite not generating as many singles as it's predecessor it doubled-down on the band's mildly offbeat penchant and was responsible for such fan favorites as the punchy "Got a Lot On My Head" and the noir power pop of "Double Life."  Prior to heading out to L.A. to recording the album, Ocasek and Co. tracked some demos at Northern Studios, in Maynard, MA near their native Boston.  Four of these demos wound up on the expanded version of Candy-O that dropped in 2017...but these weren't part of the so-called Monitor Mixes.

Cars/Ben Orr-centric blog sweetpurplejune goes into a rather thorough extrapolation on what the mixes are all about and how the tapes went missing for decades, so I'll try to sum it up in a nutshell.  The album proper was record at Cherokee Studios in L.A.  As the aforementioned site explains, a "monitor mix" is a set of quickly recorded pre-production demos usually cut live in studio as a dry-run of sorts before the formal recording of an album commences, so the engineer/producer has a reference for setting levels in the recording studio and such.  It's a common practice, especially for big budget studio sessions, which naturally, this was.  In short, the monitor mix of Candy-O is a de-factor alternate version of the album in question.  There are differences between these takes and the finished products, albeit not always dramatic.  In fact that's largely the case with the brunt of what's here, with some of the most discernible deviations being rooted in Greg Hawkes keyboard parts.  One particular anomaly among this set of recordings is a the one and a half minute take of "Sho Bee Doo," just a fraction in length of the final album version, highlighting the song's eerie "coldwave" synthesizers.  We get variations of all eleven LP cuts, the b-side of "Let's Go" ("That's It") and "Slip Away," a track that literally slipped away for almost two decades before it found a home on the band's 1995 double disk anthology Just What I Needed.  Again, if you decide to download this, you'll be shortchanging yourself if you don't take a peak at the informative backstory laid out over at sweetpurplejune, which goes into way more detail than I did here.  While you're at it, please consider buying the remaster of Candy-O here.  Rest in peace Ric!

Hey, Thanks for this and your words on Ric. Always loved the Cars. Saw them pre-fame at the Paradise Rock Club in Boston and various venues throughout the years they were active.

Have you ever come across the 'Cap'n Swing Demos' tape -the band name before they became the Cars? I forgot about that version of the group over the years. Been looking since Ric's passing without luck.

Thanks for all the cool stuff you offer.

Thank you so much for providing a link to my blog. Ric's death has been a terrible blow.

I wanted to respond to Tidesworthy... most of the Cap'n Swing songs are on Youtube. I have a list of them and some links on my blog, as I've written a couple of articles about that band as part of the history of The Cars. Here's a link that I hope will be helpful:

Obviously I'm kind of an obsessed nerd when it comes to The Cars (haha!) so please feel free to get in touch if there's anything else I can help with.

Thanks Donna, and Tidesworthy as well. Yes, I knew of the existence of the Cap'n Swing recordings but never fully investigated them.

Love what I've seen of your site so far and look forward to delving deeper. Needless to say we've all been extra Cars-conscious over the past week. Been hearing some nice Ric tributes on college radio as well. Just wish he had gotten more of this attention when he was still alive.

I absolutely LOVE The Candy-O Monitor Mixes--which I found somewhere years ago. When it would pop up on my iPod it would always grab my attention. A much better version of an already classic album from a classic blog! Thank you for spreading the word! RIP Ric!

I had a look at the 'monitor' mixes verse the album versions. Mostly they're exactly the same takes as the album versions, ie the same basic tracks, identical drums to the beat minus a little tape playback variation they align exactly.
There's are what I would call guide mixes or rough mixes. Used when you're tracking and want to pop back and put on a tambourine overdub, so you don't have to spend an hour setting up the mixing desk to get you to a listenable mix. They're just minus some overdubs and polishing, no lost versions here, just the same ones in a lesser state of finished.
They're almost like working draft copies for the band to take and listen to. For example It's all I can do is longer than its counterpart on the monitor mixes but that's only because the monitor mix is faded early.
09 Lust For Kicks has some chopped out, etc etc.
They're the same 'versions' apart from possibly different vocal takes and or overdubs.
The monitor thing isn't so called because a mixing desk is called a monitor desk. That's a different type of mixing desk used to create multiple monitor sends in things like live situations where the bass player wants to hear him and the drummer and no one else in his foldback, guitars wants more of him etc etc.
The monitor in this title is to do with the band taking a rough mix away with them to listen to what needs to be done most likely.

Thank you, didn't know this existed. Much appreciated

not a HUGE Cars fan, but is "Slip Away" the same solo song ex-Stories singer Ian Lloyd released in 1979?