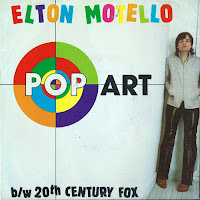 Elton Motello was the stage name of Alain Ward, and somewhat confusingly it was also the name of his band in total.   The UK-based Ward kicked off his career in a glam/punk combo, Bastard, before taking up the Motello mantle in 1978, a year which saw the release of their debut long player, Victim of Time.  That album's follow-up Pop Art, came down the pike two years later and also spawned a single of the same name.  The 45 in question served as my intro to E/M, and after surveying the deft chops and somewhat sardonic modus operandi of the A-side, I'd put Ward in the same league as B.A. Roberston, Donnie Iris and for that matter, Bram Tchaikovsky.  In short, a frontman brimming with character and sass, the likes of which we're in dreadfully short supply of these.  The flip, "20th Century Fox" isn't the Doors song, rather another cheeky original with a mildly grandiose sweep, a la something Motello's contemporaries The Motors might have turned in had they not been so straight-faced.  There's a lot of music floating around the halls of Wilfully Obscure, and amidst my numerous stacks and racks I may have the Pop Art LP I spoke of a moment ago, so who knows, maybe that one will materialize on here later.  Feel free to imbibe this two-songer for now.

Have the longplayer. Worth a listen. The kind of artist/band that should have been opening for Squeeze in '79 or '80.