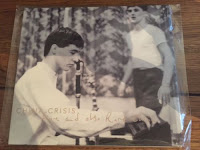 Here's another act that amazingly I haven't brought up before until now.  I knew who China Crisis were as far back as the mid-80s, but never made a concerted effort to investigate them until I started finding their records in used bins.  For Brit new wavers, they were the yin to the yang of most of what was happening during their 1982-89 peak.  Bearing a markedly disciplined and mid-tempo tact, Crisis' smoother sonic palette was no doubt interpreted as high-brow by some, but it worked to their advantage, because their early run of albums (Difficult Shapes..., Flaunt the Imperfection, etc) stand up remarkably well three decades after the fact.  In fact, C/C went so against the dayglo-techno pop grain they even hired Steely Dan's Walter Becker to produce their second LP, Flaunt the Imperfection.  New romantic yacht rock?  Well, not exactly, but pretty damn refreshing after hearing Depeche Mode and Duran Duran ad nauseam.

Fine and Also Rare China is a cobbled together collection of demos the band sold on their tour in 2008.  Thought this might be fun to share since their official catalog is still available, and I'm not at liberty to host much or any of it.  Spanning 1979-97, Fine and Also Rare China leaves out early prototypes of many of their more renown songs - "King in a Catholic Style," "Black Man Ray" and "Working With Fire and Steel," among others.  What's here however is still pretty respectable, including nascent takes of early gems "African and White" and "Seven Sports for All," plus the Diary of a Hollow Horse-era "Northern Skies."  Surprisingly much of this collection is contemporary to the band's hibernation period (relatively speaking), when they were keeping a low profile in the '90s.  Established customers will find a lot to love here, and even if ...Rare China isn't a perfect introduction to the band it's an enjoyable listen.

This is great! Thanks so much for posting