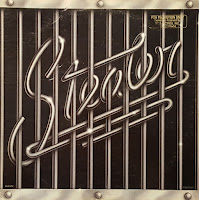 The album jacket depicted to your left may strike you as either innocuous, or perhaps even slightly off-putting.  Nothing about it screams "indie" or "post-punk, or in fact anything particularly visionary.  In some respects these assumptions are right on the money as Stealer were not indie kids, punk, or on the cutting edge of much of anything.  In fact, the foursome in question were marketed as hard rock and AOR.  Probably not the most enticing of musical propositions, and hardly the stuff of this blog's aesthetics, as it were.  "Hard rock," especially the pedestrian variety thereof, reeks of stock riffs, unimaginative FM playlists, antiseptic arenas, and all-too familiar themes of love, partying, and blue collar concerns.  Yet once in awhile I'll stumble across a forgotten hopeful of this ilk that stands out from the pack just enough to perk my ears up, and in this case even get me a little stoked.

Stealer were major label casualties (we can thank MCA for the hiring/firing) who issued this lone self-titled platter.  While firmly in the AOR mold, the band (whose whereabouts remain unknown) had a stronger melodic prowess than the brunt of their competition.  Bearing a loose resemblance to early Loverboy/Foreigner with occasional tinges of Cheap Trick, their flirtations with power-pop aren't as frequent as I'd prefer them to be, but I'll gladly take what I'm hearing on "Never Again," "If You Want Me" and "Your Heart Will Burn."  If it's more meat and potatoes hard rock you're craving the opening "On My Own Again" is a screamingly obvious (should've-been) airwaves anthem," and the even hotter second song in, "E.S.P." is a punchy, melodic gut check that genuinely outdid anything along the aforementioned Loverboy/Foreigner continuum, tame as that may sound to many of you.  The only bum item on Stealer is the concluding "Johnny," which regrettably could pass for a limp Bad Company ballad.

Compared to say, any of my Big Star, Husker Du, or Posies entries, Stealer may rank as a comparatively low priority, but I wouldn't be making it available for consumption if I couldn't vouch for it.  Go into this one with an open mind and you'll be pleasantly surprised.  Btw, pickings are woefully slim online for shedding any relevant light on this one.  Best I could find were an album critique and a thread on a hard rock forum.

Good stuff, thanks! Just shows the majors, from time to time, could put good stuff in the late 70s-early 80s.......yeah, the cover looks like a lot of other hard rockers from that same period like Strider, Lone Star, Blue Steel and lotsa others!!!!

Not bad - funny Strider was mentioned, because this album makes me think of The Babys.

Yeah, I really meant to mention the Babys in my write-up. Just didn't occur to me at the time.