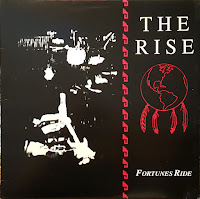 File under post-U2?  I say this not because The Rise weren't  necessarily plagiarizing Bono & Co, so much as the myriad of bands they had a more discernible influence on - The Alarm, Cactus World News and Then Jerico.  Thing is, this quartet didn't hail from the British Isles, rather from the States, presumably from San Fran.  But unlike much of U2's aforementioned offspring, The Rise boasted a distinct Americana bent - the kind that only the tail end of the '80s could have given rise to.  Armed with vaguely world-weary concerns, and a back-to-basics rootsy fervor, the band's ambitions never amount to anything too pompous or grandiose on Fortunes Ride.  Such moderation works to their advantage, but their songs don't necessarily follow suit.  The driving title track is a sheer highlight though, and the vigorous "Empty Soul" and "In Our Land," while formulaic, pack a decent modicum of urgency.  The ballads (I'll let you figure out which ones they are), while well intentioned just don't cut it.  Elsewhere, a curious anomaly sprouts up in the guise of "Eagle Dancer," a souped up spaghetti western hoedown if I've ever heard one.

Just checked the link Marco and it worked, so please try again.

Wire Train? Yeah a little bit, but no so much the earlier WT albums.