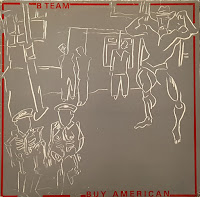 This was a killer find.  Another one I kinda bought for the cover that turned out to be way more significant than the sleeve.  B Team were a Bay Area trio with a post-punk sonic aptitude and a socio/politico hardcore ethos.  Buy American's artful opening salvo "Dance Capital" is driven by an irresistible, staccato-laden groove plundered from Entertainment!-era Gang of Four and fortified by clever lyrics.  The dissonance continues on "Eyes Are Bleeding," wherein the B Team doctrine yields a more distinctive tact.  Bleaker forays on side two, "This Damage" and the concluding "Right," point to an absorption of Joy Division in addition to dadaist funk. Compelling in both their sheer attack and forward-thinking palette B Team had a wealth of things going for them, but they apparently dissolved after a this disk.  A 1982 single preceded Buy American, which I'm going to try to get my hands on.

I have the tracks from that single, if you want to hear them. Good stuff! Gang of Four was a big influence on early B Team.