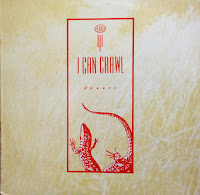 Here's another one that I don't physically own, but I think I'm going to have to remedy that.  Not much is known about UK denizens I Can Crawl.  To their credit a Facebook page has been established offering at least a few details, mostly surrounding a reunion album they released in 2012-13 of thereabouts.  ICC's brand of post-punk bears a serrated edge and a bit of a chill, just not anything particularly morose or mopey.   Desert occupies a similar plateau to their former contemporaries Cactus World News and Goodbye Mr. Mackenzie, and I think it will be apparent to a good many you that I Can Crawl's frontman recalls one Peter Murphy.  It's all more splendid then I'm letting on, but don't take my word for it...

Once again glad you have posted this and I actually had this vinyl when first arrived in L.A. after leaving Down Under. Must have traded it in to Rhino. Anyway no idea why. If you are able to re-up this great, I would greatly appreciate it. Thank you very much in advance!!