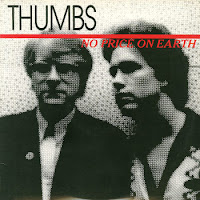 When the Thumbs were active in the late '70s/'80s there was a myriad of directions they could have ventured into - ska, new romantic, rockabilly, hardcore, AOR, etc...  The long and short of it all is that they wound up as an honest to goodness rock and roll band, sans any pretensions or gimmicks.  Granted, that m.o. is much more scarce these days, said option wasn't much more tempting in the Thumbs era.  About four years ago, I shared their previous, self-titled 1979 effort.  At that point I found these Kansas blokes to be a tad common, and by a matter of degrees they still were three years later, but with age comes progress, and if you're lucky, inspiration.  The Thumbs were indeed blessed with a spoonful of luck or two to tighten up their power pop cum bar band pastiche on No Price on Earth, hinting that they just might have listened to a Jonathan Richman or Velvets album or two. Kansas City to Lawrence Vinyl blog has provided some useful insight into this record as well, but isn't sharing the music contained within.  That's where we come in.

I really liked some of the Dylan-inflected (infected!) songs on that self-titled album, so I am looking forward to this.

Just discovered this. It's pretty good. Had I heard it in its era, I'd probably have dismissed it as too MOR. But since this kind of music is "much more scarce these days," as you note, it's nice to hear this sound now. Reminds me a bit of Tommy Tutone.