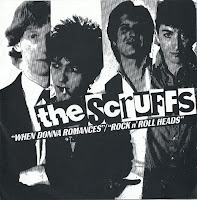 In 1977 this Memphis quartet "broke the ice" with Wanna Meet the Scruffs?, a colossally lauded proto-power pop album that unfortunately a relative few could partake in the invitation of.  Chalk that up to limited availability I suppose.  Furthermore, given it's esteemed reputation, it's been said that the fortunate few who owned the record dare not relinquish their copy under any circumstance.  When it was finally brought into the digital age in 1997, the band revealed a treasure trove of unreleased recordings pre/post-dating Wanna Meet...  Potentially, a lot of Scruffs fans back in the day may have missed the single I'm presenting here, as it seems nothing of theirs was nearly as publicized as that glorious debut.

Despite their locale and numerous connections, The Scruffs didn't gravitate to Big Star so much as the Raspberries.  That influence isn't as pervasive on recordings subsequent to Wanna Meet, but by the time of this 1980 7" the band wasn't quite MTV caliber either...but they were oh so close.  "When Donna Romances" is a nugget of power pop bullion for the ages, still subscribing to the precious moxie of that first album.  The flip, "Rock n' Roll Heads" plays it faster and looser - literally, possessing a tell tale Ramones-y rhythm, curtailed just shy of the punk threshold.  You can check out some additional Scruffs recordings, including some that are relatively recent here.

A. When Donna Romances
B. Rock n' Roll Heads

Any chance of a re-up? The original version of the single is hard to find