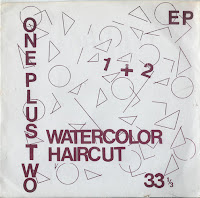 I first/last wrote about One Plus Two almost a decade ago, so I suppose that makes me overdue.  Information on this quartet was scant at best back then and ditto now.  The equation in question were a co-ed indie pop foursome, potentially hailing from North Carolina, and from the sounds of it, it wouldn't surprise me if Mitch Easter was occupying their orbit (though he isn't credited here).  The edgy record sleeve and oblique title lend themselves to a band with some mystique to enlighten us with, though in the case of One Plus Two their angle of attack was comparatively plaintive.  Strum.  Jangle.  Hooks.  Collegiate sensibilities.  Etc.  Chances are you've encountered a record of this stripe before, but for what it's worth it's done properly and satisfies in spades. .

Thanks so much, I was looking for this gem.

How do you do it? How do you keep finding new/old jangle-y Easter-y relics from the Golden Age of indie rock? I'm not complaining... I just hope whatever vein of musical ore you're mining never goes dry...

I'm either going to run out or die trying.

This really was on my wanted list. Won't you happen to have their first album - The Ivy room?

I have Ivy Room. Keep your eyes peeled.

'Pictures' of you.... Great to hear this again after a long long gap

I've just been listening to this and am going crazy trying to figure out where I know "Pictures" from... is it a cover? Was it on some compilation? Argh.