Ghosts of Record Store Days past - Sloan & Metz/Mission of Burma

Another Record Store Day has just crept into the annals of retail history.  This year marked the tenth anniversary, and although attendance was full bore per-usual (not to mention the frustratingly scarce limited runs of day-specific releases) something seemed a tad anticlimactic about this one.  At any rate, I thought I'd revisit a couple of relatively recent bygone titles from 2015 and '16 respectively. 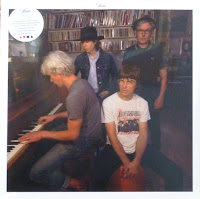 Technically it's not titled as such, but he four-song ep known as Alternates, was Sloan's contribution to the RSD fray two years back, featuring (yep, you guessed it) four alternate takes of songs that made the cut for their 2014 platter, Commonwealth.  Side A takes the cake for me, with a more fleshed out ensemble take of the Jay Ferguson penned "Neither Here Nor There," and an a slower, revealing arrangement of Chris Murphy's "Get Out."  Sloan's latest volley of albums haven't necessarily been their most rewarding meaning this companion piece to the aforementioned Commonwealth falls shy of essential for casual fans, and arguably not entirely crucial for diehards.  You be the judge. 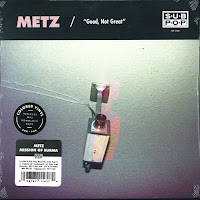 The concept for the pairing of relative post-punk newbies Metz, and intermittently active vets Mission of Burma has an elementary theme - have each cover a song by the other.  Ironically, Metz don't take to task one of Burma's lauded signature songs (e.g. "Academy Fight Song) instead settling on an album cut from 2006's Obliterati, the group's second aughts era reunion album.  I'm not as acquainted with Metz oeuvre, as it were, but Mission of Burma's coarse take of "Get Off" leaves me with the impression that both combos are a match made in dissonance heaven.

Thank you so much for sharing the Metz/MoB split single! If you are a Burma (or Christmas) completist, a great blog recently shared the Forced Exposure single with Christmas' version of "Max Ernst" and Dredd Foole doing "Revolver" (neither one is a very good cover, more like a friendly Boston scene in-joke).

PS - I think Ultraprophets of Thee Psykick Revolution is hands down one of the best indie rock albums of 1989.

Hey jonder. Thanks for the link.