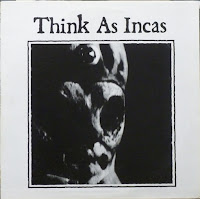 I'm not sure how prominent Think as Incas were in their hometown of Memphis, but the quartet saw frontman David Shouse migrate to the ranks of future Sub Pop-all stars The Grifters.  There are virtually no other commonalities between the two groups, which is all good and well with me since I wasn't terribly compelled by the Grifters.  The Incas were of college-rock stock themselves I suppose, opting to pursue a more traditional tact a la The Connells, adopting a dab of the Georgia Satellites tartness   without conveying themselves as blatantly derivative of either.  Couple o' saucy rockers here, appearing in the guise of the title cut and "Wishing Again," while the acoustic finale, "I'm the Boy" could pass for a sobering Uncle Tupelo ballad in a heartbeat.

Any chance you could re-up this? I have it on vinyl, but it is a well-worn and scratchy record, and I can't find a digital version anywhere. I originally had a copy of this this on a cassette tape back in the late 80's! And I just missed seeing them live in Memphis as a teenager. I did see A Band Called Bud shortly after that, then again when they changed their name to The Grifters. But Think As Incas was my favorite of Dave Shouse's bands.