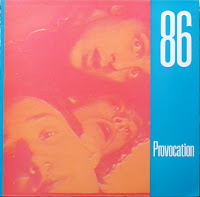 I made my acquaintance with Atlanta's 86 a good ten years after they disbanded, via an ep titled Minutes in a Day.  Not an overwhelmingly awe-striking record, but the band's Yankee spin on tuneful Brit post-punk put their foot in my door, so to speak.  After said revelation, it would be eons before I excavated any further 86 ventures, but low and behold the follow-up to Minutes, 1987's Provocation eventually found it's way into my hands.  What a difference a year can make between records.  Provocation still bore a decent chunk of 86's collective worship of clangy, Anglo crown jewels C.S. Angels and the like, but the album was equally informed by a more dissonant quotient of American indie-rawk:  The Wipers, Nice Strong Arm and an assortment of lesser names that would crop up on imprints such as Homestead Records.  This recipe tempts delightfully on paper, but in practice...  It's still a recommendable album, but you might be better off sticking to side two (tracks 6-11).  You can peruse much more detailed text on 86 here and Beyond Failure blog, who are hosting the bulk, if not all of their discography.