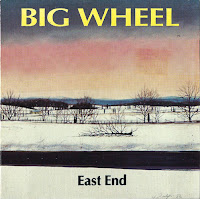 After Louisville, KY punk wunderkinds Squirrel Bait split in the late '80s, throaty vocal sorcerer Peter Searcy invested his efforts into the demonstrably more lucid Big Wheel.  The quartet subscribed to a comparatively standard rock n rule schematic, occasionally spiked with the slightly frenetic tincture of S/B...just don’t get your hopes up if you're pining for another Skag Heaven.  Frankly, Big Wheel were innocuous riff-brokers, but if you’re taken with Searcy’s singular timbre, the band infuse just enough groove into the proceedings to keep things afloat.  I'm not sure what's up with them titling a song "Metallica" that has absolutely no relevance to the band (though I have to admit, it shreds harder than anything else on here).  Bit of a head scratcher I suppose.  East End was followed up by two more Big Wheel volumes, Holiday Manor and Slowtown.

writing in to offer my gratitude, not only for the tasteful morsels offered here but also your prose and wit. i'm very happy to have found Wilfully Obscure and have been imbibing hundreds of bottles of nectar here for a few years now. feeling rather rude of me to just take and take, without even saying thank you. thus here's how we offer our thanks in these parts; Terima Kasih!

Talking about Big Wheel:
In the late sixties this group (from The Hague) with the same name did a nice rendition of the Creation's If I Stay Too Long. One or two ex-members of famous Dutch band Q'65 were involved, if my memories don't fool me:
https://www.youtube.com/watch?v=DQiJ5au-oMU

Terima Kasih is not a person spavid. It's how you give thanks in Malaysian.

OMG. My apologies! Guess you've got another ignorant American on you hands.

Man, have at vinyl test pressing of this album somewhere around the house....

" I'm not sure what's up with them titling a song "Metallica" "
I think that was a temp title and they never came up with a better one.

Thanks so much for this! I know they did a reunion show a couple years back and had some kind of rarities/live CD for sale. Don't think I will ever get my hands on that one!

Thanks so much for posting this. Been trying to track down BW albums for quite some time, only one more to go. I have some of Searcys later stuff from the band Starbilly (mid 90's) if you're interested. More post-grunge than BW, but still with that characteristic Searcy vocal melody.

jwhazel, which one are you missing?

Missing Slow Town. I actually met peter a few times and he gave me the starbilly stuff but didn't have any big wheel stuff on hand. Have checked B&ME here and town and no luck either.

Are you in Louisville? Try The Great Escape or maybe Better Days on Bardstown. I'll keep an eye open!

Thanks dude, but the link is dead...