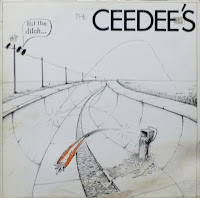 Hmmm.  Bought this one based on the oddball album jacket, the band's potential power pop pedigree.  Truthfully, I was anticipating something a little more avant-garde than that, say in the post-punk realm.  No go as far as that notion was concerned.  The Ceedee's were a southern Ontario enterprise (possibly hailing from Peterborough) who's take on pop music was relatively conventional, yet smarter and wryer than your typical pedestrian flunkies.  I appreciate their homegrown allure, even if they are a tad unfocused from song-to-song.  The first few tunes on Hit the Ditch are the most effective, vaguely reminiscent of the Tarney Spencer Band and even Todd Rundgren.  Bear in mind, the keyword in that sentence is vaguely.  The title track and the Canada-centric "Patriotic Song" are must listens, the latter bearing a pretty colossal chorus hook. "Let Me Share (in the Ordinaire)" is a bit of a goof, with some Devo-esque vocal tricks, and "Mama Raised a Misfit" inches ever so slightly in the vicinity of punky hard rock.  An ep followed Hit the Ditch in 1986.  You can access an interview with the Ceedees via the link above.

Can you make this available again?
Thanks from The Listening Post!