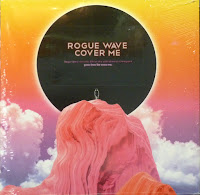 I tend not to open new vinyl releases, and that extends to Record Store Day titles as well.  In fact, I held off unsealing this one for two whole months in hopes that a digital version of Rogue Wave's wax-only, Black Friday RSD title Cover Me album would surface, but this time no dice.  Granted, it was only limited to 1500 copies, plus it didn't come with a download code...but anyway.  So far as the band goes, I was hip to Rogue Wave's 2003 debut, Out of the Shadow, even before Sub Pop picked it up a year later.  I warmed to Zack Rogue's DIY adaptation of the Death Cab For Cutie homage thing quickly, but by the time his band's fourth or fifth album rolled around they had assumed a more "professional" indie rock penchant that was too samey and slick for my ears.

Nonetheless, this record composed of renditions of nine mainstream-ish tunes, circa the Reagan-era, was enough to get me back on board.  It's hard to make generalities about Cover Me, much like it's difficult to make generalities regarding Rogue Wave themselves.  If there's a common thread binding this endeavor it's that straight covers aren't an option for Zack and Co. - even if that means retooling ZZ Top's "Sharped Dressed Man" with Casios.  It's the more faithful interpretations on Cover Me that translate best - "In Between Days" (Cure), for example.  I'm reluctant to give this type of criticism, but taking a dull piece like Genesis' "That's All" and altering it into something even more flaccid isn't a hot idea, nor is expanding "Under the Milky Way" into a languid, yawn-inducing, six-minute exercise.  I kinda dig what they did with "She Sells Sanctuary" and "Let My Love Open the Door."  As for RW's take on "Bette Davis Eyes," I believe I find more merit in Alvin and the Chipmunks rendering of the Kim Carnes classic.  Make of this what you will.

I guess it doesn't matter now that you've made your own digital version, but my copy of Cover Me definitely came with a download code. I'm listening to it as I type this.

Another strange thing about this release is that the original RSD listing mentioned three songs that didn't make it onto the final record. I remember "Love My Way" by Psychedelic Furs was one of them. Maybe that and the other missing songs will show up on a 7" one of these days (with a code!).

Well, I dug a little deeper into the sleeve, and voila, it was there after all. Thanks for the heads. Yes, I noticed some of the songs on the RSD track list were absent. Bummer.