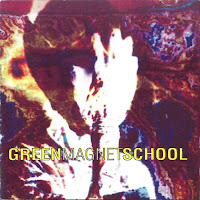 I've been at this thing for almost ten years now, and it just occurred to me this week to feature something by Green Magnet School, a bygone Boston, MA enterprise whose tone might ring a tad abrasive stacked up to what I normally offer.  Blood Music sounds like the byproduct of copious Big Black listening binges, but Steve Albini had no hand in the creation of this album.  GMS bore an icy post-punk demeanor, cloaked in a skittishly avant latticework, absorbing Joy Division’s urgent pulse and Sonic Youth’s artful mystique.  Their arrangements were challenging and bustling, often exuding a fever dream intensity with a bedrock of dissonance at their core.  Blood Music indulges in freaky guitar squalls aplenty, not to mention more frantic arpeggios than you can shake your proverbial stick at.  It's all-out Defcon 2 on the bristling opener, "Ellipse" while the Dadistic disco stomp of “Sonic Extermination” taps into an early PIL vein escalating to something even more enticing as the tune builds. “Noxin” delivers an even more compulsive groove, but surprisingly, the record concludes on a near-melodic note of resolution in the guise of the six-minute "Windshield."  Blood Music fascinates and transfixes with it's myriad textures, dynamics and motifs, making it's messy viscous stream of red and white cells well worth the spillage.

The band has made this and other recordings available gratis on Bandcamp, but this rip was entirely of my own making.

Thanks, never heard of them but listening to it here: https://youtu.be/jBc_fsNBL20 and is definitely worth a download.

thanks a lot for this one. Any chances of a re-up of One Plus Two's Once In a Blue Moon album next time? Many thanks! Dave

any chance of a re-up for this? tks a lot!