Clive Langer and the Boxes - I Want the Whole World ep (1979, Radarscope) 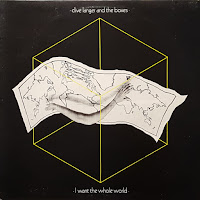 Yet another gem of a disk that I had zero awareness of when it initially hit the racks.  Not that it caught fire, or to my knowledge was even released in the States.  In fact Clive Langer's stature in his native UK wasn't know primarily on the basis of his namesake, rather his involvement in more renown acts Big in Japan and Deaf School.  For the five song I Want the Whole World Langer wasn't one to dig in his "punk" or "wave" heels, but instead opted for a more natural approach.  In his case, "natural" was loosely akin to what the Kinks were dispensing around the same time (coincidentally, Langer's vocal aplomb wasn't dissimilar to Ray Davies).  Deftly crafted tunes like "Lovely Evening" and "I Know I" are pleasingly sophisticated without resorting to anything pretentious, and are ample proof that the man and his accompanying Boxes boasted considerable talent.  A follow-up LP, Splash, surfaced a year later.