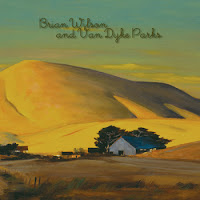 The "myth" of the Beach Boys once long-unreleased SMiLE album loomed larger than the music enshrined in it's grooves, if only because the album wasn't issued in it's entirety until a solid 45 years after the sessions were abandoned in 1967.  In fairness however, a good chunk of SMiLE's most crucial selections accumulated a half-hour in the band's career spanning Good Vibrations box in 1993.  The Beach Boys main collaborator for the should've been follow-up to Pet Sounds was Van Dyke Parks, a composer/producer by trade for a variety of big and small screen shows.  In his role as co-conspirator on the SMiLE sessions, he was also a key songwriter alongside Beach Boy's prime mover and creative backbone Brian Wilson. Stories as to why the album was never fully completed (at least under the Beach Boys banner) are long and legion, but I'll let you investigate that on your own.  Roughly thirty years later, in 1995, Wilson and Parks reunited for an album that would be fully realized, Orange Crate Art, which is seeing a thoughtfully padded reissue on it's 25th anniversary.

It wasn't so much nostalgia that reunited the two as coincidence.  Brian Wilson hadn't been doing much in the years since his 1988, comeback solo album Brian Wilson came out, and was ready to resume recording when Van Dyke Parks phoned him (presumably in the mid-90s) to float the idea of working together again.  The idea wasn't to continue where they left off in 1966-67, nor did either of the two men have designs on out-smiling SMiLE.  Far closer to the truth, Parks had written a new batch of songs that happened to appeal to Wilson, although the Beach Boy emeritus concedes in Orange Crate Art's liner notes, "We were hoping to catch some of that SMiLE energy."

Sonically, they did - to an extent, as examples of Wilson's fabled "pocket symphony" sprout abundantly on the record's twelve selections, offering orchestral sweeps aplenty (albeit from one gradation to another).  What differentiates OCA from SMiLE is the whimsy and surreal aptitude the latter record possessed.  That's not a slight or complaint, nor is that to say the music on Orange isn't fun, rather a more mature and measured modus operandi is at play here.  Parks wrote virtually every morsel of text here and handled arrangement duties, leaving his companion with little else to do but sing and harmonize (and I'm assuming play a little piano).  By the '90s Wilson's vocals had taken on a remarkably deeper and huskier tone.  This development would have been outright startling to listeners had his 1988 solo debut not happened.  Luckily, most of his fans were prepared, but the transition still took some getting used to (personally, I'm still coming to terms).

That being said, there are some immaculate songs to be had here, the stunning title track being foremost among them, one of Brian Wilson's post-BB performances.  "Sail Away" and "Summer in Monterey" are discernibly breezier, and perfectly in line with the Wilson/Love aesthetic, even though it's Parks' ink adorning the lyric sheet.  Elsewhere, "Wings of a Dove" is plush and modern, and the story-line vibe of "San Francisco" might be the closest thing that Wilson was aiming for in the late '60s.  The trademark harmonies weaving their way through every song here are nothing short of impeccable, not to mention soothing and consoling as ever.  Perhaps it wasn't Orange Crate Art that triggered Wilson's impulse to finally complete the long-belated SMiLE (under his own name in 2004) but one has to reckon if the successful pairing of him and Parks all those decades later didn't spark a few robust embers.

Omnivore's two disk expansion of OCA features three outtakes - all genteel covers of such established standards as "What a Wonderful World" and Gershwin's "Rhapsody in Blue."  The bonus disk is composed of most of the album in instrumental form, falling somewhere between a classical score and the pop-friendly "pocket symphonies" Wilson had always relished.  You can find Orange Crate Art at what brick and mortar music retailers are left, or obtain it straight from Omnivore.  Amazon has you covered as well.
Posted by spavid at 9:09 PM

Growing up, I couldn't escape the Beach Boys, their stupid surf & cars & girls nonsense. I couldn't understand why they were held in such high esteem by my musical peers. "Brian Wilson is a genius." What? Well, time passes, and I grew to understand and appreciate (intellectually) the BBs huge place in the history of R&R. But still, those dopey songs...

It was Orange Crate Art that made me a convert. Yes, I know it's primarily Van Dyke Park's songs and arrangements, but the record allowed me to hear Brian—and the BB's classic sound—with new ears. So 50 years later, I now get what the fuss about Pet sounds was all about. But I still play Orange Crate Art more frequently. My only caveat: Those damn digital keyboards that are all over the record...

Your experience was similar to mine Slidewell. Never really "got" the surf/sand motifs, but Pet Sounds and SMiLE made me a convert, at least for that portion of the BB's career (and even a tad beyond that). If the keyboards grate on your nerves here, you might want to avoid Brian's late '80s solo album I mentioned.