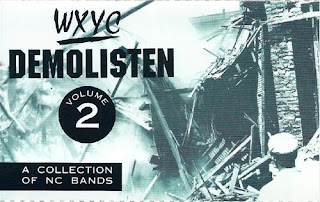 This one was scarce enough not to earn a page on Discogs, but whatever.  Coincidentally or not, this cassette compilation was released in tandem with the Chapel Hill, NC indie scene threatening to go national, but truth be told, only a portion of WXYC Demolisten 2's roster was from said college town...but not all that's presented here is traditional indie rock. Casting a wider net than one might guess WXYC's dandy little reel goes so far as to represent world music and metal. Nonetheless, the brunt of what's here largely caters to the Wilfully Obscure set with fine contributions from Dillon Fence, Eight or Nine Feet and Willard.

I'd be remiss if I didn't note that the purpose of Demolisten is/was to expose fresh and/or unsigned talent, which this tape capably does. By the time this installment in the series rolled out of the tape factory, Superchunk were more or less off to the races, so to speak, but as is the case with any given concert it helps to have a proven headliner.  The inclusion of an acoustic and/or demo version of one of their crucial, early single sides, "Cool" is an easy highlight, though I believe it also wound up on the Aussie Self Mutilation comp from around the same era.  Satellite Boyfriend, a band whom I've intended to raise some awareness of (and likely will in the near future) make an appearance, and tar heel, ska-punk favorites the Pressure Boys close things out with a rendition of "Radar Love."