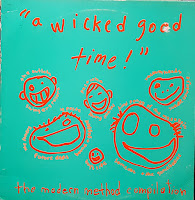 Population only counts for so much. Cities like Houston and Phoenix each boast roughly double the populous of Boston, MA, yet Beantown (at least during the eighties and nineties) outdid some of their larger locales in terms of pumping out renown bands by seemingly exponential margins. And it seems like that's how it went for not-so-renown Boston bands as well, the focus of A Wicked Good Time!  This bountiful seventeen song feast was issued by Modern Method Records, an in-house label for the wildly successful and still operating Newbury Comics chain.  Even though many Newbury Comics outlets resemble FYE's these days, the moniker for this record remains the store's slogan some forty years after the fact.

AWGT starts with a bang, via a combo called Pastiche, an edgy power pop act who only bore a trio of singles in their lifespan, sadly without a proper LP to show for themselves. Pastiche's hooky merger of guitars and keys should have cemented them as Boston's answer to the Pointed Sticks, and a definitive compilation of their studio recordings has been decades overdue.  The Outlets punky "3rd Floor for Me" is perhaps the most aggressive song they ever attached their name to, Swingers Resort were splendid power pop kids who really epitomized what was so enticing about that turn-of-the-decade aesthetic, and Future Dads wield a catchy sax line amidst their bangin' foray "New Feeling." And we're still not done talking about side one!  We're also treated to no less than two cuts from Boston's legendary punks La Peste whose "Lease on Life" plays out like a delightful re-write of Agent Orange's "Bloodstains." Finally, the Young Snakes featured future 'Til Tuesday front-woman Aimee Mann, who exudes a very different vocal dialect then we're used to on "Brains and Eggs." Love the Pylon-esque guitarwork on this one.

The album's second side is a bit spottier and somewhat more avant, with the likes of abrasive no-wavers Bound & Gagged, and on the opposite end of the spectrum Bird Songs of the Mesozoic (featuring Mission of Burma alum Roger Miller) whose instrumental "Pulse Piece" channels a Tubular Bells vein. We get another tasty nugget from Pastiche, and the otherwise unheard of Someone and the Somebodies lead us on a quick post-punk tear. Hometown heroes Boys Life also get it on the action with a pair of sassy, mid-paced punk churners.

Thanks! I don't know the sampler yeat, but it seems to be very promising. With bands like La Peste, Someone&Somebodies and ala
Mission of Burma nothing can go wrong.