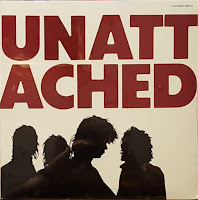 Yet another Beantown proposition, who to their/our detriment only produced this one platter, a mere ep no less, but hey, I'll take six songs over four any day. The Unattached were one of those rare acts that knew how to mix it up from song to song without exuding anything resembling an identity crisis. Bearing a rootsy and rollicking no-frills penchant these four guys (who by the group pics on the back cover misleadingly suggest they were headbangers in the making) were potent rock and roll purists touching on such local luminaries as the Del Fuegos and the Neighborhoods. My pic hit of this platter is none other than "It's Only Love" a power pop basher that would have done the likes of Material Isssue more than a modicum of justice. To the contrary the bluesy slow jam, "Down" which concludes this joint is a lazy maneuver that luckily doesn't mar the whole of the record.

They might not have been as ubiquitous as, say, Scruffy the Cat, but these guys definitely played around town at the usual clubs. Also, the song "It's Only Love" had previously appeared on the third Throbbing Lobster comp "Claws."