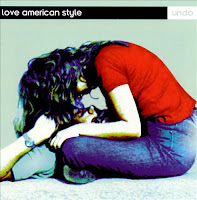 Once upon a time (say early/mid '90s) there was a very good noise-pop band called Smashing Orange, who as it so happened were overshadowed by another band from that era who also had the word "Smashing" in their moniker.  Before I digress any further I won't provide you any other clues besides that.  Preceded by a couple of superlative eps in 1991, the next year saw the release of their debut, The Glass Bead Game, a white-hot cocktail of dream-pop amidst a molten, amped-out stew of feedback and Rob Montejo's distant vocal aplomb.  S/O soon made the major label jump, churning out one more platter, 1994's No Return in the End.   Sadly, No Return... did in fact illicit the premise of it's title, bearing none of the hazy or raw hallmarks of the debut, and instead opted for a more streamlined m.o. that was often indistinguishable from many of the band's contemporaries.  Smashing Orange called it a day not long after, but wouldn't you know it, Montejo would soon straddle a new rocking horse, Love American Style.

Their lone LP, Undo, actually undoes a lot of the pedestrian drag that plagued No Return.  While not an out-and-out throwback to his shoegazing days of yore, Montejo colors from a diverse set of palettes here.  "Not About to Lose It," and "Divider" mine a pretty divine Superdrag vein, the shuffling "Easy" and the strummy acoustic respite "Anodyne" point to a considerably more lucid penchant, while a measured amount of tremolo smoothly infiltrates "The Sky Will Be Milk" to primo effect.  Undo may fall shy of a masterstroke, but once you're acquainted with it, partaking in this disk is nonetheless a treat.

I remember when I bought this album for one song - Not About to Lose It - and ended up loving the entire album.

pleaser reup this one. Many thanks!