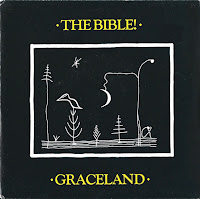 This one's three decades old, but nonetheless I failed to investigate The Bible! until far more recently.  From what I've been able to glean the exclamation mark on their moniker was only applied on early releases.  This Cambridge, UK combo actually had two full lengths that were apparently well circulated - Walking the Ghost Back Home (1986) and Eureka, on a major label no less, a couple years later.  Behold their first single (depicted to your left).  "Graceland" is an exemplary slice of Anglophile pop, rife with lilting folky textures a la Aztec Camera and Justin Hayward's post-Haircut One Hundred solo forays.  The single would be released several times over in multiple formats in the years to follow.  The flip, "Sweetness" is considerably more chilled-out, gravitating toward the AOR realm.

A. Graceland
B. Sweetness

Oh wow, I've been looking for Bible stuff for ages. I found out about the Maccoll brothers through their follow-up band, Liberty Horses. They released one album - "Joyland" - that contains what may be my favorite single pop song of all time, "Shine"...

(They are also related to the late pop singer Kirsty Maccoll.)

Thanks for the recommendation Pernt.

Think I've got both albums somewhere and Graceland along with Honey Be Good and Crystal Palace enjoyed a modest amount of airplay here in Manila. Lead vocalist Boo went on to solo, with a song recorded by other artist- Patience of Angels.

Oh, you may have meant, Nick Heyward of Haircut, 100 - some nice songs off his solo albums, too.

Ditto that plug for "Joyland" by Liberty Horses -- a very fine album indeed. The Bible featured Neill & Calum Maccoll (brothers to Kirsty) and singer/songwriter Boo Hewerdine. Their sophomore album "Eureka" was produced by Steve Earle, of all people. After they broke up, the Maccoll brothers made "Joyland" and continued as session players while Hewerdine had a fairly successful solo career, including an excellent collaboration with Texas songwriter Darden Smith. My feeling was always that solo Hewerdine needed a better band/musical partnership and the Maccolls needed a better lyricist. The Bible were formidable but short-lived. This single is excellent and I thank you for sharing it

Been looking for The Bible albums for the longest time as well. Thank you for this!

Please , re up this great band .

It is very easy for students to copy assignments of their friends but they don’t usually think about the consequences of doing that. Most of the universities in the world are strict towards plagiarism. Students are usually expelled for plagiarism works which could destroy the life of the students. To ensure that students complete their assignments with less difficulty as well as with good marks, we at Assignment Help provide online assignment help to all students in Mechanical Engineering assignment help. We ensure that students get plagiarism free work and are tension free about any consequences. To know more about we visit our website.