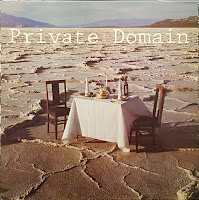 I've seen this one kicking around on Ebay and in record stores for ages, but I didn't take the plunge until a few days ago.  Bought it based on the intriguing album jacket more than anything else, which is entirely superficial of me.  Turns out that Private Domain claimed San Diego as their physical domain when this disk lurched onto the racks, courtesy of Chameleon Records, who I believe were more renown for acts like Dramarama, but I digress.  Not the subrosa masterpiece I was hoping for, the album (which was re-released a year later on another label, bearing a vastly different track list) is your proverbial mixed bag.  PD's approximation of white boy rasta on "Turn Out Right," and their apparent signature piece "Absolutely Perfection" are at the very least passable, and in some cases outshine the album's less satisfactory moments (like the pitiful power-ballad misstep "Broken Hearts").  Despite some '80s shtick and period keyboard trickery, Private Domain were at their most effective and assertive when they skewed to a riffier album rock motif, exemplified on "So Comfortable," not to mention the pseudo power pop of "Burn the Torch," which was a hell of a lot more convincing than Cheap Trick's sappy radio hit at the time.

Oh my god this album is terrible.
That being said, I feel its one of those records that is so awful that its worth giving a spin or two for that fact alone. I saw that you posted it and it made my day. Thank you for this.

Thank you Spavid for sharing this obscure album!!
It has variety, something for someone.
The song I like the most here is Spiritual Warfare.
Thank you!!

Thanks folks! It's not every day I receive gratitude for supposedly awful music.