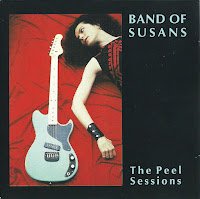 Aw, man.  This is probably the only Band of Susans album in my collection (save for their first ep which I posted ages ago) that isn't on iTunes.  Their history is a bit lengthy, so I'll let you peruse the details here if you're so inclined.  The overall premise of the band, at least initially, was to have an inordinate amount of guitarists (say, three or so) to pack as a big a sonic wallop as possible (they did).  The band's original lineup entailed no less than three women named Susan (surnames: Lyall, Tallman, and Stenger), but only the latter of those three (on bass) made it onto the pair of John Peel Sessions I'm presenting here.  The sessions surrounded a couple of their early and most cathartic axe-squalling salvos, Hope Against Hope and .
Love Agenda.  Though his involvement in the band was brief, Page Hamilton performs on the 1988 Peel session, which was just prior to him running off to the races with Helmet, and I believe he sings on the songs as well (sure sounds like him).  The first of the sessions kicks off with a rather straightforward rendering of Gang of Four's "I Found That Essence Rare," and a slightly more unhinged take on the Stones "Child of the Moonlight."  The real highlight is the Susan's own maelstrom, "Hope Against Hope," perhaps their defining moment.

The July 1989 session yields merely two cuts, including the Susan's spin on Wire's Chairs Missing chestnut, "Too Late," and yes, it cooks.

The singer for most (if not all) songs was the band's leader Robert Poss.