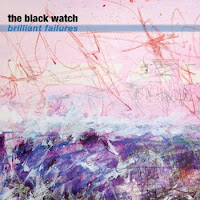 I'm tempted to say that The Black Watch (or more accurately prime mover John Andrew Fredrick) is back with a new record...but then again it's not like he's been away or anything.  For at least eight out of the last ten years B/W have dispensed a new LP, sticking to a recording and writing regimen that only Robert Pollard and Co. seem capable of superseding.  I've lost count of how many albums specifically have accumulated in Fredrick's well stocked canon, but I'm apt to partake in his latest volley, Brilliant Failures, because it's downright gratifying, and one of the Watch's most consistent.

Negotiating a fine line between tension-inflected indie guitar rock and a sprinkling of forward thinking post-punk has always been this band's forte.  Toss in some not-so-subtle melodic undercurrents and slyly melancholic hues and you've got a potent concoction that manages to hold everything together in a tight, lucid framework.  They're vigorous without getting aggressive on the churning "Twisted Thinking," "What I Think," and "Mind You," all bearing some notably distortion-laden musculature.  The Watch have always demonstrated an Anglophile bent, one that's more of a natural function than strained or contrived, and it shades Failures' heart-on-sleeve romantic lament  "The Personal Statement" and even the lilting acoustic opener "Julie II just as capably as some of the comparatively high-strung pieces I mentioned.  Better yet, there's plenty of movement skirting between the two variables, and Fredrick's overarching insistence on quality control alone should be enough to buoy established B/W clientele and virgin ears alike.  Brilliant Failures is available in virtually any format that you're seeking including colored vinyl through the group's Bandcamp portal where you can sample some tunes for yourself.  Amazon has you covered as well. 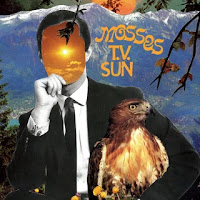 I went into Mosses T.V. Sun cold, but the album in question turned out to be anything but.  If you can be confident of anything this "tube" isn't remotely monochromatic, rather one that bleeds a beguiling technicolor array.  The brainchild of  gifted, multi-instrumental savant Ryan Jewell and co-conspirator Danette Bordenkircher eschew any elementary or hackneyed "pop" notions into last week (or year for that matter) and opt for an idiosyncratic potpourri of asymmetrical psych and prog inseparably tangled with miscellaneous audio collages and transcendental gestures for miles.  The overall effect is that of Ozric Tentacles, Olivia Tremor Control, and perhaps less-so Beck, all slewn together into an often dizzying mesh of trippy caterwauls navigating an oblique path via sinewy connective tissue that entails the employment of sitar, nylon strings, mellotron, vibraphone, flutes and then some.

This is some profoundly textured stuff my friends, but Mosses' dense, labyrinthine sonic constructs are surprisingly porous, so much so that you'll find passages like "Another Plan" and "You Can't Fall Off a Mountain" to be as contemplative as they are ornate.  Amidst all the surreal goings-on in T.V.-land you'll parachute back down to Earth on a relatively structured respite or two, best exemplified by "MSR" and the disarmingly benign opener "Tall Bearded Iris Speckled."  And I'd be remiss if I failed to mention "Time in Your Mind" exudes overtones not dissimilar to Pink Floyd's Barrett-era mindbender "Astronomy Domine."  T.V. Sun is yours for purchasing from Anyway Records  Midheaven distro portal, and Bandcamp and Amazon would be happy to fill this gap in your collection.
Posted by spavid at 9:41 PM

I remember seeing the Black Watch in Los Angles, at a Not Lame Recording Company night, at either the old Poptopia or International Pop Overthrow festivals, i can never remember which, in 1999 i believe......other NL bands were on the bill too like The Shazam, Miracle Brah, Martin Luther Lennon, and others, and The Black Watch had a release at the time on NL....i regret to say i don't remember much sadly....

I don't know if you saw a comment I made on an older post, so I will try here. Is there any chance you can re-up that album by The Cry? It's for that Facebook project I was telling you about.
Thanks,

Thanks for shining a light on the black watch's fabulousness. I was not aware he/they have a new release, so I'm hurrying to snatch it up.

Thanks for commenting folks. Allen, I just updated the Cry link. Enjoy.