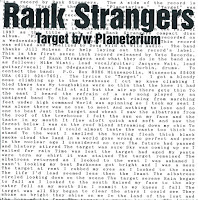 Damn, where has this band been all my life?  Minneapolis, MN from what I understand, but it wasn't 'til last year that I caught wind of them via this used single.  Looked the Rank Strangers up for the first time this week, and was pleasantly surprised to learn they have a fairly deep catalog featuring no less than eight LPs, and almost as many shorter releases.  This wax is the extent I've experienced the Strangers so far, and while I hesitate to make any broad stroke generalities, the A side, "Target" is awash in proto-punk aesthetics brimming with raw, nervy production a la the Velvets and significantly more so the snider panache of Iggy and the Stooges.  "Planetarium" packs almost as much attitude, and while a tad less frenetic, these gents accent the proceedings with spicy guitar fills reminiscent of ABKCO-era Stones.  Simply put, the Rank Strangers don't bear a smidgen of '90s sonic trappings - an astonishing feat given their era.

If you dig, check out their webstore.  Most of the CDs are a reasonable $10, with vinyl full-lengths priced not much higher.

A. Target
B. Planetarium

wow - is it Channukah time? love this!

Ive been looking for aomething for so long and I was wondering if you could help me.

There was a band from Boston called Zulus who made a great albunm called Down On The Floor that was produced by Bob Mould. Its got a great song on it called "Never Again".

I hqve been looking for this album forever, as well as their preceding E.P. Bones. There may have been anohter self titled EP as well if Im not mistaken? PLease help me with any information you may have on this matter...as I am really close to giving up. Thank you.

Just re-listened to this 7" 4x in a row- fuuck, its really good. The blast of lyrics running alongside the amphetaminey "I cant stop playing all these wiggly 32nd notes!You guys keep up" guitar.
Yeah, no 90's in it at all. '79-85, plenty. I cant think of who played this way - Television, dream syndicate seem like pot smoking hippies, compared to these 2 songs. Shocked to see they're still going, and ive never heard of'em til now. I hope their other work is as good. Thanks