Alerta - In the Land of a Thousand Pretty Dreams (1983, Welfare Factory) 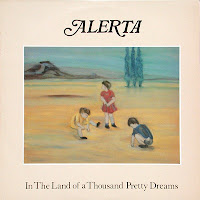 It wasn't my initial observation regarding this Dutch combo, but their moniker conjures up the name of an over-the-counter antihistamine or something.  With that out of the way, what led to my investigation of Alerta was a connection to one of my fave '90s dream-pop wunderkinds The Nightblooms.  Specifically, it was Alerta guitar slinger Harry Otten who made said migration, but these lads didn't emanate anything approaching the shoegazer realm themselves.  No, Alerta were doggedly post-punk, mid-tempo in pace at that, purloining a trick or two from early (and I mean early) Siouxsie and Killing Joke, while loosely touching on Joy Division U2, and even Crass label alums Rudimentary Peni.  Plenty of noir and existential-lite mystique abounds, with no shortage of echo-y guitars.

...Land of a Thousand Pretty Dreams' initial volley of tunes are Alerta's most convincing, but further in, while many a song threatens to escalate to a fiery and billowy crescendo things level off in limbo without truly reaching an assumed zenith.  Problematic, as so much of this record's potential is blunted due to that frustrating scenario.  I wouldn't let that chase you away however, because if anything else this trio had enough forward thinking ideas to keep me engaged.  The two added tracks at the end were from a split ep Alerta did with the far more prolific The Ex.  You can read a fairly informative article about this album over at Son of Eet U Smakelijk blog.  Just make sure to scroll down a spell.

Finally, since I don't actually own this record, I'd like to tip a shot of whiskey to whomever was thoughtful enough to rip it.  Thanks to Discogs for the sleeve art.