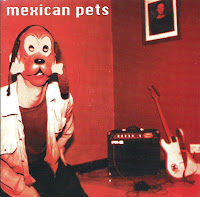 This gem of a band/record breezed by my eyes not too long ago when I spotted some of their recordings on one of my file-sharing platforms of choice.  At the time I had no idea who Mexican Pets were, but the name must've caught my attention because before I knew it was downloading a folder of supposed "early demos," quite randomly at that.  Smart move on my part.  As it would soon become evident to me the Pets were a bygone Irish inde-rock outfit who to my sheer good luck wielded a penchant for meaningful songwriting couched in a distortion-savvy, albeit tuneful construct.  To this set of ears, similarities to one of their contemporaries in the opposite hemisphere, namely Australia's Glide, made for an enticingly pleasant surprise, though MP's likeness to the aforementioned was in all probability a sheer coincidence.  All of this aside, the songs on that demo spoke for themselves, drenched in bittersweet, melancholic sentiments, intermingled with melodic but fuzz-addled guitar swells (a la Swervedriver and early Dinosaur Jr.), all cloaked in a raw, mid-fidelity context that allowed the Pet's warm, analog hues to come bristling to life so genuinely.

The Pets' recordings never made it stateside, and the band folded by the late '90s, having only one proper album to their credit, Humbucker.  Nobody's Working Title is actually a consolidation of two earlier EPs, and those songs wound up on yet another future compilation.  A decent overview of their career can be accessed on Wikipedia, and hopefully there will be more to come regarding them in the not-too-distant future on these pages.

Wow this is good stuff -- thanks!

I heard one of their songs on a tv show sound track and was in london at the time (96-97?) and caught them playing at the dublin castle, had a chat to them. Nice down to earth guys. Grabbed an album "The voice of trucker Youth" and heard nothing more of them. Picked up the other 2 discs later on in bargain bins.

Do you by any chance have the Junior High Sucked 7" by 30footfall released in 1995? It's OK if you don't. Thanx in advance

Thanks for commenting folks. Really superb stuff. How this band didn't make my radar when they existed is beyond me.

Love the song on the compilation. Could you please post a new link? Thank you very much.