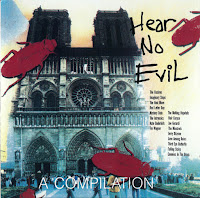 Set the Wayback Machine to 1991.  During those heady pre-web days around the turn of the alt-rawk decade, I was downright reliant on fanzines and more legit music rags to inform me of burgeoning ear candy that would otherwise miss my radar.  It was that year when I saw an ad in Option or Alternative Press from a small indie imprint dubbed Galt Records in downstate New York that was offering up a free cassette compilation of bands I was entirely foreign to simply by writing to the addy and requesting a copy.  I took the bait. Shortly thereafter, in the mail came a high-bias tape with a colored j-card.  Hear No Evil was the name of the reel in question, and on it were fifteen or so acts I never encountered, even on college radio.  Bear in mind I was up to my knees in outfits like Nirvana, Superchunk, Ministry and the Replacements at the time.  My cup truly did runneth over in this fertile era.  So how could a gaggle of relatively straightlaced pop/rock vendors like Imaginary Steps and Love Among Ruins have possibly stacked up against some, if not all of my aforementioned icons?  The answer was quite simple - they didn't.  Not that I had any animosity towards the HNE comp roster, rather I just wasn't moved when there far more visceral options at my disposal.  Into a shoebox the tape went and I rarely gave it a second thought.  Well, what a difference a couple decades can make.

Back in the early '90s, if a band wasn't decked out in flannel or failed to have a minimum of five distortion pedals at their feet I usually passed.  With maturity comes the acceptance and ultimately embrace of music that was more nuanced, lucid, and tuneful.  I really only got into the "pop" thing by 1997, and was relived there was an underground swelling with rewarding but often unheralded acts.  I began my excavation, and eventually (and continuously) burrowed deep.  It turns out that records by some of Hear No Evil's finest participants like Enemies in the Grass, Falling Stairs and The Bandables made their way into my collection (not to mention this site) in the intervening years.  I didn't realize it back in '91, but that once unappreciated freebie cassette foreshadowed where I was headed. 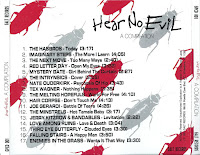 Those three aforementioned acts (with the Bandables credited here as Jerry Kitzrow & the Bandables) became major league favorites of mine, easily persuading me with scrumptious hooks and jangly propulsion.  Like I said, it took about twenty years for me to come around, but there's a wealth of other standout "left-off-the-dial" participants that I really wish I could hear more of - The Hasbros, Third Eye Butterfly, Hair Corpse, The Next Move, Nate Ouderkirk, the Bandables-related Mystery Date and more.  Best of all, HNE doesn't cater to any extreme.  A significant amount of the groups here are operating under similar parameters as say, the Smithereens, but it's not all power pop mind you.  The version of the comp I'm presenting today is from the CD incarnation, not the tape.  A full tracklist is available on the scan of the tray card to your right.  BTW, a sequel to Hear No Evil was released shortly after, however I have yet to locate it.  Enjoy.

Very interesting batch of bands, and I echo your sentiment in wanting to hear more from certain ones. In case you find and share the follow-up compilation, I'd be glad to hear it. Thanks for sharing. Still the best music blog on the Internet as far as I'm concerned.

Thanks David. That means a lot. If I find the second comp I'll be sure to share it.

Agreed, this blog is the gold standard!

I was the drummer/singer in The Hasbros and we have an LP coming out in 2017 for the first time ever. I also play in Red Hare (Dischord), Garden Variety, Bluetip (Dischord) and many others...have not heard that song in a zillions years...thanks!!

Love the Hasbros! You're a fine drummer and I love the Hasbos sound! My brother Jerry is from the Bandables and now has a new band THE FLURRIES.https://www.facebook.com/TheFlurries.ColourShow

New LP by The Hasbros is finally out. Vinyl at CD Baby. Digital download on iTunes and Amazon. Hear it for free streaming on Soundcloud and Deezer. TheHasbros.com

reup please this comp. Thanks!