In discussing the recently released Strum & Thrum compilation (and my revisionist take on it) I expelled a pretty expansive dose of text, therefore, forgive me if this is write-up is comparatively leaner.  This isn't the first time I've dedicated bandwidth to The Pointed Sticks.  Their 1979 Out of Luck 7" on Stiff Records was the subject of one of my first posts, reaching back to 2007.  This was later followed up by the live disk Raw Power Pop (recently made available on Bandcamp) featuring recordings from their 2006-07 reunion tour. 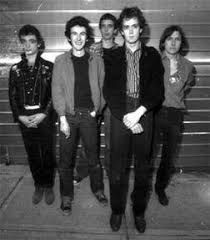 I've got a couple more bundles of Sticks goodies to bestow tonight, but for the uninitiated, this Vancouver quintet was a legendary, but short-lived institution in their hometown, circa 1978-1981. Possessing the energy and sass of punk, the band's aptitude resided more in the pop domain.  What separated the Pointed Sticks apart from the then-burgeoning power-pop pack?  In a nutshell, an organ player by the name of Gord Nicholl, whose Farfisa-style accompaniment proved to be a key facet in defining the group's incisively catchy modus operandi.  Responsible for a trio of phenomenal singles on Quintessence Records, a well-above-average 1980 LP, Part of the Noise, and other juicy morsels like "Apologies" on the Waves Vol. 2 compilation, P/S left behind a somewhat brief but enviable legacy when they put the kibosh on things in 1981.  I didn't make my acquaintance with them until a good fifteen years or so after they called it quits, but I was quick to catch up, and I don't think anyone or anything on the planet could dissuade me from thoroughly loving this band.

As stimulating as they were on record, the energy of their live performances was searing and rambunctious (even their reunion gigs two and a half decades on).  Some of that fervor was captured and bottled in a performance recorded at San Francisco's New Wave A Go-Go (aka Temple Beautiful) in late '79.  The fourteen-song set has circulated before, but outside of torrents and such, not in abundance, so I'm presenting it here.  It features signature Pointed Sticks soon-to-be classics like  "Lies," "The Real Thing," "What Do You Want Me To Do?" and the aforementioned "Out of Luck," alongside a cover of the Sonics "The Witch," always a reliable live favorite for these chaps.  Attendees of this gig also heard a preview of a few nuggets that would appear on Part of the Noise, namely "True Love" and "American Song."  An encore run-through of "Christmas, Baby Please Come Home" might very well be exclusive to this gig, I might add.  Thanks to Terry Hammer committing this show to tape way back when.

Additionally, I'm also giving you a set of 1980 demos that have made the rounds for what seem like ages, often appearing on other blogs and file sharing platforms.  Tracked fast and loose, most likely in preparation for Part of the Noise, these guys cooked, even in an informal setup.  The recording features a handful of P/S tunes that never turned up anywhere else, "Middle Aged Teenagers" and "Careless," while another rarity on the tape, "All My Clocks Stopped" eventually found it's way to the Souvenirs - Little Gems of Pop comp in 2009.

Reissues of the album and singles/rarities collection, Waiting for the Real Thing, along with two reunion albums are still available through Sudden Death Records.

I remain optimistic that some day, someone will make a huge hit out of a cover of "The Real Thing" and make the Pointed Sticks the millionaires they deserve to be.

Thank you very much. I love Pointed Sticks !!
My biggest wish:
Reup in one of your next reups.
SMITHETEENS THE MEGA BOX 21 Cds.

That's a nice thought Cinnamon Girl - just so long as it doesn't get played to death on the radio. I'd hate for that song to become the next "Stairway to Heaven" or "Crazy Train," where I'd get sick to death of it.