So we've reached the final evening.  The candelabra has reached full capacity and it's time to unfurl one more gift.  Technically, it's the fortieth anniversary of this record, though that isn't my motive for presenting it.  Nor is it because it's especially innovative or visionary, and in fact, outside of power pop enclaves The Heat's lone LP, Have An Idea would probably strike pedestrian ears as a good rock and roll album and not much more.  I like to think we know better. 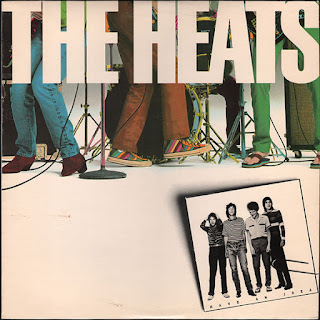 Hailing from Seattle and beginning life as The Heaters, these four youngsters soon shortened their name, cut a few singles and Have an Idea, and tried to make a name for themselves.  To a certain extent they did, and are still remembered and hopefully still discussed and revered in the Northwest, but they failed to break big, and from what I've been able to gather weren't encouraged enough to keep the band on the proverbial front burner for a second studio platter.  Weened on the likes of Cheap Trick, and to a lesser extent Petty and the Heartbreakers and even UK pub rock, The Heats were too overtly pop for the Emerald City's still active punk scene, and were often reviled for it.  According to Clark Humphrey's highly recommended book on Seattle music history, Loser, for an indie record ...Idea was recorded on a major label budget.  Well, it's nowhere near as slick as say, The Wall or Rumors, or even Shoes Elektra catalog, but it's sharp, clean, bejeweled with warm analog hues, and even packs in a respectable modicum of reverb.

As you might expect, what makes Have An Idea so effective are a strikingly consistent and satisfying batch of tunes.  "When You're Mine," "Remember Me," and "Night Shift," are all deftly honed salvos of guitar pop manna from the heavens, emanating romantic sentiments without any syrupy aftertaste. Saucier items like "Sorry," and the particularly biting "Divorcee" mine a Rockpile-ish vein, while the guys get downright Beatlesque within the two and a half minute confines of "Some Other Guy." No shortage of dynamite moments here. Have an Idea wasn't the most stylish or groundbreaking album to see the light of day in 1980, but in the four-decade rear view it strikes me as equal parts classy and classic.

Just a couple more quick observations.  A 2010 review of the remastered and expanded version of ...Idea over at Hyperbolium.com indicates the album wasn't remastered from the original master tapes, and thusly isn't as rich of an audio experience.  The 2007 reissue on Air Mail Records is the version that I own and am offering here, and even though I'm not acquainted with the original vinyl incarnation, I have to admit that this could benefit from a bass-ier treatment.  That being said, it does append four bonus cuts from surrounding singles, and the artwork is faithful to the original jacket. Finally, there's a bootleg cd-r version floating around that includes a patch of live bonus offerings. in 1983 a live Heats record, ostensibly released by the band and titled Burnin' Live, was issued, albeit featuring nothing familiar from Have an Idea.

Thanks much for this one!

What a great way to end the series... and the year. Thanks again for another 12 months of musical majesty. See you in 2021!

Another gem. This was fun and enlightening.
Peace to you. Thanks.

Thank you for all the great tunes again this year!

Thanks for one of the most interesting blogs i know.

1980 regional power pop is in my wheelhouse- thanks for posting