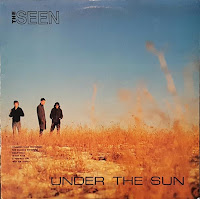 Our fellow instigators at Shotgun Solution re-posted the rare debut single from State College, PA's The Seen, and inspired us to digitize their lone album, Under The Sun/In the Rain.  As per the bio enclosed with my copy, this trio made their objective fairly loud and clear - to consciously not resemble anything that was part and parcel of the era they found themselves situated in.

Under the Sun... isn't an indulgent throwback to the '60s so much as a subtle one, with a relatively modest modus operandi that often slots between the Association and The Zombies, graded on a lo-fi curve.  Sonically, the Seen nail the aesthetic they're going for to a 't' on psych-infected slices of folk rock "Why Am I Here?" "Nancy's Song" and the jangle laced "In the Rain."

What few references that have surfaced online regarding these guys put more emphasis on their garage/mod cred, but aside from the comparatively aggressive "The Letdown" and melodically strident "Younger Than Yesterday," the tension is kept to a minimum on this disk.  Often recalling a long lost private pressing from say, 1968, Under the Sun... yields almost ceaseless quality control, so long as you're on the same page as the Seen.  Though I can't find a relevant link to share at the moment, at one point I learned the album in question received a limited digital reissue of some sort, but currently you're better offer hunting down a not-so-tricky-to find original vinyl copy.

Cheers for this one!
Doug Edmunds went on to be one half of the Gladhands, then to The Stars Explode, and the Seen regrouped for a second album, Three Days In June, in 2009.

I appreciate the kind words about the album that I did with Jeff and Doug 35(!) years ago. Listening to it today, all I can hear are the flaws, but I'm glad you enjoyed it!

Cheers! Currently at work on my first solo album, due out in late 2020, I hope. All of The Stars Explode's catalog is available on most streaming services, including Spotify, Apple Music and Amazon.