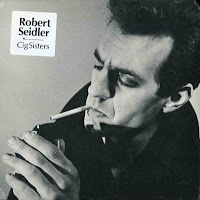 Many espouse the notion that an album should never be titled after one of the songs on the LP itself.  In the case of Robert Seidler's Cig Sisters I'd argue to the contrary, given the song bears such a prominent presence.  It's not an anthem mind you, yet "Cig Sisters" bears enough nervy, pedestrian panache that ever so faintly absorbs the choicest entrails of Dramarama, and to a lesser extent mid-80s Psych Furs.  Seidler's mid tempo, alt-rock shtick isn't particularly innovative, but muscular salvos like "Summer Air" and "I Can't Believe" are gratifying all the same.  Even some of the other songs that failed to persuade me on my initial listen of Cig Sisters are gradually sinking in.  More records by the man and his quartet of co-conspirators exist, albeit not in my collection.  You can find out a few more details here.

My copy of Cig was a radio station copy, the front cover of which was defaced so drastically I purloined a more representative image off Discogs.com  Thanks to whomever was thoughtful enough to make it available.