It's not right, it's not fair - A remembrance of Adam Schlesinger and Fountains of Wayne + FOW acoustic 2008-09

If the past 30+ days wasn't enough of a mind-fuck already, the passing of Adam Schlesinger on April 1 from complications relating to Coronavirus made our dystopian state of affairs a much more devastating reality.  Even though we had a full day's warning that Adam had contracted this miserable (and in his case) lethal illness it wasn't enough to prepare us for what became the inevitable.  Then again, an otherwise healthy person dying at merely 52 hardly seems inevitable to most of us. 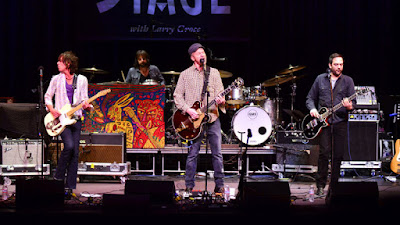 I never felt a personal connection with him despite being a pretty dedicated adherent to Fountains of Wayne, the power-pop inflected quartet he co-founded with Chris Collingwood in the mid-90s.  Another band he had a hand in formulating, Ivy, made it onto my sonar almost from their inception, though there wasn't quite enough there for me to latch onto. You're no doubt familiar with Adam's resume, as many articles and memorials have laid out far more thoroughly and eloquently than mine - co-writer of That Thing You Do's  famous theme song (one of the most popular tunes ever by a fictional band, The Wonders), collaborator with numerous other musicians, songwriters, CW's Crazy Ex-Girlfreind show, Steve Colbert, power-pop supergroup Tinted Windows and the rest of it.  A recent piece on Stereogum demonstrates the depth and breadth of his work and is well worth a read.

For me, Adam Schlesinger largely began and ended with Fountains of Wayne.  I didn't regard myself as an obsessive fan or even a completest, and only got to see them perform once - yet I did absorb the albums fairly thoroughly.  Collingwood dominated the microphone, with Adam assuming the role of lead guitarist and apparently the key songwriting force.  I cautiously say apparent, because even though both guys are given equal songwriting credits in virtually every set of album notes I perused, Adam's penchant as a go-to song-scribe is so legion that it's a somewhat logical deduction he carried a hefty serving of text and insight to the table.  And now that I mention it, what of that insight?  In FOW both men had a knack for tapping into middle-class, suburbanite mindsets, especially filtered through the vantage point of up-and-coming bachelors striving for some semblance of a white-collar career, and of course a love life.  Not unlike Ben Folds, Adam and Chris wrote plaintive vignettes steeped in often ironic but relatable themes married to devastating chorus hooks.  I often thought 2003's Welcome Interstate Managers (which coincidentally housed their lone mainstream hit, "Tracy's Mom) went a little overboard with it's Office Space inspired motifs.  Moreover, by the time their follow-up, Traffic and Weather hit in 2007, I got the impression things were getting a bit formulaic - yet I kept coming back, because try as one might you can't kill off the memory of a great melody or clever couplet.

Somewhere around 2018 or '19 I learned that the Fountains had no plans to reconvene.  It was a sad notion even before Adam's startling death last week.  Being that Chris was a wholly capable frontman, I can easily see him strapping on a guitar at some point with the intention of keeping nuggets like "Survival Car" and "Red Dragon Tattoo" alive, but of course, it will be under his own banner, not Fountains of Wayne.  With that sobering thought in mind I leave you with ten acoustic FOW recordings.  I don't have the origination details of the first five cuts, but they were apparently recorded without the presence of an audience.  "Little Red Light" onward are culled from a performance at Mountain Stage in Charleston, WV from March 2009.  Enjoy

I was fortunate to have done a tour with FoW when the debut had just been released, so I got to see 'em every night for a couple weeks. Adam was a clever, smart and funny guy. He'l be greatly missed.


(Speaking of "formulaic", have you heard this?
https://www.youtube.com/watch?v=7vVJ2Om-QVg )

Damn, this is a tough one. I was lucky enough to get to see them on a bill with another favorite 90s band, Superdrag. I'm okay with formulaic, when it's a 4/4 three-chord power pop ditty. I can listen to that all day long.

I have to warn you: if Covid-19 takes Brian May from me... I'm going to be a mess. Just giving everyone a heads up.

(Oh, and I hate to be "that guy", but... it's "STACY'S Mom". I only quibble because it's one of my absolute favorite power pop songs ever. Yes it got played to death, but for me, every new listen is as fresh and exciting as the first time.)

Thanks for posting this. I was devastated by the news, having been a big FoW fan for the first two albums, as well as Ivy and Crazy Ex-Girlfriend. I spent over an hour on my radio show this weekend paying tribute to his music (show is archived and streaming at https://www.mixcloud.com/jakeroren/radio-free-j-ro-04-04-2020/).

Thanks for the link Billybadbum. Was new to me. Must have been a blast to tour with them.

As for "Stacy's Mom," Pernt, I'm very spent on that one, but believe it or not I'm not totally burnt out on "Smells Like Teen Spirit."

Thanks J-Ro. Yeah, Adam was actually the bassist. That's a big thing for me to screw up. If you get the chance check out Jody's pre-FOW band The Belltower.