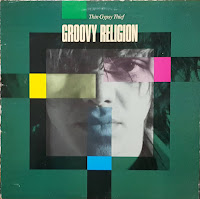 Bearing a sound that's thankfully not emblematic of their moniker, Quebec's Groovy Religion didn't fall into the trappings of their chosen decade.  The primary conundrum with this four-piece was forging something of a definitive identity, not to mention cobbling together enough quality material for an album. Nonetheless I wouldn't go to trouble of sharing Thin Gypsy Thief if I deemed it totally devoid of substance. The band's sparse sonic template lends oodles of breathability and dynamics wherever the needle lands, but only about half of the time do they seem capable of renting out all the empty space. With a general aptitude that suggests post-punk (or at the very least some permeation of "modern rock") GR actually make a solid go of it on the opening "Dark My Girl" with it's sneaky, stealthy verses punctuated with rubbery, fret-less bass fills countering some enticing, melodic guitar salvos. "Beautiful" threatens to bust out into an all-out punky barnburner in that Lords of the New Church sort of way, but doesn't quite build to the apex I was so hoping for.  Then there's the six-minute "Charlie," whose promising first half of which is saturated with clangy, moody chords and William New's ominous vocal parlance...before deflating entirely into a pile of random bass notes and drumbeats. Finally, the boys manage to segue a minute or two of the Animals' "We've Gotta Get Out of This Place" into their own much duller original, "Kitchen Boy." Whatever amount of potential this mini-LP suggested, wouldn't  reveal itself until Groovy Religion's  Tom - A Rock Opera saw the light of day in 1995.

I spun on my vinyl copy today for the first time in about 30 years, and googled it to see if it had any web presence. I agree with your assessment, but having seen them countless times in Toronto in the late 80s, I would just add though that they were an excellent live band, which the record completely fails to capture. Also, although Psyche Records was a Montreal label, Groovy Religion was a Toronto band, and in fact, quite central to the scene (gigging often with Change of Heart and Scott B Sympathy, and even sharing musicians).