It was inevitable, but in the most rewarding way possible.  At some point I knew I was going to be bitten by the Big Stir Records bug.  The power pop-centric label established around 2017 first staked their claim by releasing dozens of digital singles from up and coming acts with a few "vintage" names on their roster as well (Jim Basnight of the Moberlys and Lannie Flowers of The Pengwins renown come to mind).  It wasn't until a couple of years later that Big Stir began to release full lengths, this time physically on CD.  CD compilations of the imprint's digital singles have proven to be extremely popular and the label is up to their thirteenth volume already (which I'll address along with the ninth and tenth installments below). Moreover, Big Stir Records has been a boon a for fans of traditional power-pop, the kind championed by sadly bygone labels like Not Lame and Big Deal. 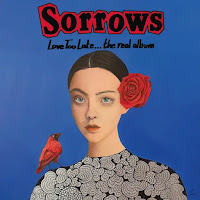 So what Big Stir release in particular made me take that one giant leap for ear-kind, so to speak?  A rebooted version of the Sorrows second LP, Love Too Late, originally released in 1981, and more flawed and compromised at the time than I could have ever imagined. The NYC based four-piece sprouted in 1977, at the height of punk and were a fixture at all the usual spaces like CBGS's and Max's Kansas City.  Though the Sorrows weren't punk by definition they certainly fooled a lot of their followers, who by the time of their 1980 album Teenage Heartbreak, issued by an affiliate label of CBS (Pavillion) had tamed their sound to a savvy but loose amalgamation of the Heartbreakers and the Romantics. Although they weren't necessarily dangling on the cutting edge of the power-pop/wave movement, Teenage Heartbreak was a phenomenally great debut and an undeniable hit with the cult that adopted the Sorrows. The record garnered them a small but respectable national fanbase, but the bean-counters at CBS expected a bigger return on their investment...and would go to enormous and craven lengths to ensure the band's '81 follow-up, Love Too Late, would yield the kind of revenue they insisted on.

Per the liner notes of Love Too Late...The Real Album, by late 1980 the band was prepping their second record.  Evidently, things were going well for the Sorrows before they strapped in for a flight to London to work with their high-pedigree dream producer Shel Talmy, who had made a name for himself working with everyone from the Who to the Kinks.  Unfortunately, Talmy and the band's management at CBS were steering the ship, and the Sorrows soon became unwitting and reluctant passengers.  On Teenage Heartbreak the vocals were a group effort between guitarists Arthur Alexander and Joey Cola, plus bassist Ricky Street, but for Love Too Late it was decided to whittle the mic responsibilities to just one member (presumably Alexander)... and a host of random session vocalists, apparently brought aboard to compensate for the rawer angularities of the quartet proper.  Although details are scant, original drummer Jett Harris' parts were substituted with those of yet another rando studio hack, against the Sorrow's blessing.  By and large the idea for LTL was to de-emphasize the band's vigorous guitar attack and play up synthesizers, that to my knowledge the band had no desire to bring to the table. The Sorrows exited the British isles with a record they were not merely dissatisfied with, but one which they felt was completely unrepresentative of them - literally and metaphorically. Love Too Late arrived in the marketplace in 1981, but given sluggish sales and the soul-crushing scenario presented above, it ultimately led to the band's premature dissolution. A full four decades later the erroneous album was finally rerecorded to the band's satisfaction by a majority of the original lineup in the guise of the aptly titled Love Too Late...The Real Album.

For those who've heard it, surface level, there isn't anything necessarily wrong with the original '81 incarnation of LTL.  In fact, it's a thoroughly presentable and often enjoyable album with plenty of spicy guitar parts, but the band's power and panache is diminished for a far slicker m.o., to the point where they could pass for an updated Raspberries. You could certainly do worse, but again this wasn't the intention of the Sorrows.  For example, comparing the original/recently revised takes of Love Too Late's reved-up opening salvo "Christabelle" the backing vocals sound almost "canned" compared to the considerably more natural sounding accompaniment on this years "corrected" version.  Furthermore, purely from a sonic standpoint, the Real Album revision is discernibly more organic, and packs more of a bite. Similarly, the Beatles-indebted "Rita" is comparatively subtle and ineffectual in it's ho-hum 1981 state, whereas this year's model (literally, you could say) is crisp and catchy, with virtually every single component of the arrangement more prominent in the mix. Ditto for many if not all of the tunes when compared head-to-head.  In essence, The Real Album strikes me as the ultimate remix/remaster job, but these are in fact entirely rerecorded takes (with the great Robbie Rist enlisted as co-engineer I might add).  From the get go, Love Too Late was never going to be a desert island disc, and neither iteration of the record surpasses the energy and grit of the band's debut, Teenage Heartbreak.  Instead, the point of The Real Album was to finally scratch a forty-year itch, and right what was seen as an egregious wrong from the vantage of the record's four architects - and that's precisely what the Sorrows have accomplished here. 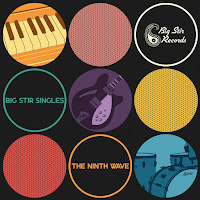 Perhaps the only thing surpassing the popularity of Big Stir's copious deluge of digital singles is their quickly accumulating CD compilations of them. Before I give you a quick rundown of the Ninth and Tenth volumes, I should mention I'm already behind the eight-ball, as Eleventh, Twelfth and Thirteenth installments exist as I type this!   Anyway, onto the Ninth Wave depicted to your left. The Persian Leaps don't appear until four songs in ("PRN") but I'd be more than content to move these folks to the head of the class given their crunchy and assertive aplomb.  Rossie Abbott arouses some well-placed yacht rock maneuvers via "Hold On," David Brooking's "Livin' Through the Plague" is as clever and spot on as current events get, and The Brothers Steve shake my proverbial bottle of ketchup as well. Irene Peña turns in a pair of Fountains of Wayne renditions, with her reading of "The Summer Place" being especially appealing, and Nick Frater's splendid "Alone Again (Naturally)" emanates Paul McCartney more than Arthur Lee and Love. 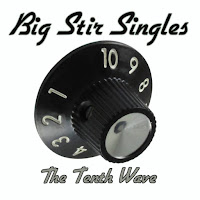 And speaking of Macca,  yet another wellspring of silly love songs abound on Big Stir's Tenth Wave singles collection.  What sweet a surprise to meet my eyes/ears than the inclusion of two songs by Melbourne, Australia's Icecream Hands, a band I assumed went the way of the buffalo almost two decades back. Sounding right and tight as ever I'm happy to say. Nick Frater's "California Waits" strikes me as the should-have-been feel-good anthem of this summer, while Anton Barbeau and Allyson Seconds' "Octagon" shapes up as a perfect example of twenty-first century power pop. More notably, this batch of 22 tunes features a bouquet of striking covers. NPFO Stratagem take two very different songs to task - Ringo Starr's "Back Off Boogaloo" and more surprisingly a lounge-induced rendering of The Dead Kennedys' "Nazi Punks Fuck Off." October Surprise tackle John Cale's "Paris 1919," The Popdudes take on "O-o-h Child," and The Incurables transform "Muskrat Love" into something fairly raucous.

All of the aforementioned titles are available now through Big Stir's homepage, Bandcamp and Amazon. Be on the look out for an exceedingly limited red-vinyl pressing of the Sorrows Love Too Late...The Real Album!

Thanks for your introduction to this label. Will definitely be spending some time and money on their Bandcamp page.

I think you have confused the songs "Alone Again (Naturally)" with "Alone Again (Or)". They have very similar titles, but the latter is the song by Love, and the former was a McCartneyesque hit for Gilbert O'Sullivan in 1972.

What a great write-up for those who don't know the saga of Sorrows. Some really tasty tunes.
Thanks so much.