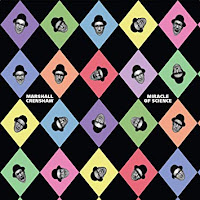 For an artist who arguably peaked on his first two albums, Marshall Crenshaw has remarkably not pumped out a subsequent steady stream of diminishing returns.  That's no easy feat given the caliber of 1982's Marshall Crenshaw and the following year's Field Day which are revered by both guitar pop purists and early adopters of the gentleman in question.  In fact, from a creative standpoint things never really went "south" so to speak for Crenshaw, rather just on divergent tangents.  Nonetheless, some of his albums (roughly a dozen of 'em) fared better than the rest, and there are even ones I've modestly taken exception with (Life's Too Short anyone?).

If anything else, a good chunk of the man's catalog has been neglected, specifically a slew of albums he cut in the mid-90s through the 2000s that didn't bear a major label imprint.  His seventh studio LP, Miracle of Science, circa 1996, was his maiden indie foray, and is now being released on vinyl for the first time, with a rejiggered song sequence and significantly refurbished sleeve art.  And it's not a bad album to revisit at that, as it proved to be one of his loosest and varied affairs.  Thing is, virtually every album Marshall Crenshaw brings to market feels like casual day at the office, with Miracle... being especially representative of this modus operandi.  The commencing "What Do You Dream Of," with it's serendipitous flow of acoustics and electrics, is the kind of pop tune that would seem a miracle of musical science in the hands of any other singer/songwriter, but for M/C it emanates as naturally as putting on a pair of slippers.  Another absolute stunner, "Starless Summer Sky," harkens back to the aesthetic of his breathtaking early records, brandishing a structure that smacks of the finest Field Day had to offer.  "Laughter" and "A Wondrous Place" amble along on a considerably lackadaisical path, particularly the latter which features strings, marimba and some faint flamenco affectations.

Amidst the inspired originals on Miracle reside a pair of covers.  A reading of Dobie Gray's 1964 oldie "The 'In" Crowd" isn't much of a revelation, but how about a Grant Hart solo cut?  And not just any old Hart song, but one of the finest the sadly departed Husker gave rise to, "Twenty-Five Forty-One." Truth be told, it wasn't the original incarnation that Crenshaw became acquainted with, rather Robert Forster's version on the I Had a New York Girlfriend covers collection, but no matter. It's great.

"Seven Miles an Hour" winds Miracle... out, but not before M/C messes with us by prefacing it with a backwards take of the song in it's entirety, included as a bonus cut.  Furthermore the vinyl variant of the album is coupled with a bonus single of two more recently recorded songs (both remakes including Michael Pagliaro's "What The Hell I Got").  Elusive Disc will take care of you if opt to spin the black circles, while Amazon is holding down the CD and digital fort.  Available as we speak.
Posted by spavid at 10:11 PM